UVA Football News and Notes: Looking back at Clemson, ahead to NC State

D cuts down on big plays 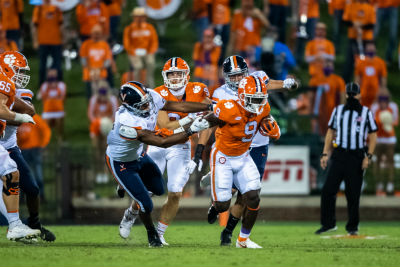 The talk from the defensive side of the ball all week was: limit the big plays.

OK, so, we saw improvement.

Clemson had 18 plays of 10+-yard gains this past Saturday night. Those plays accounted for 364 yards.

“That was our first priority,” UVA coach Bronco Mendenhall told reporters on Monday. “You know, Clemson is so good at shock and awe, where you show up and balls just go over your head and points are on the board so fast. And there are these giant plays. There were two parts to our plan. Number one, we had to control the downfield throws. The second part was we have to tackle.”

On that point: there were issues tackling Travis Etienne.

The senior tailback had a pedestrian 73 yards on the ground, but he turned five otherwise simple passes from Trevor Lawrence into the flat into 114 yards through the air.

“The number of third downs, not many teams get Clemson in third and long that frequently, and quite frankly, if we would have known that, we probably would have practiced third and long a heck of a lot more,” Mendenhall said.

Need to rev up BA a little sooner

Brennan Armstrong was 6-of-13 for 49 yards in the first quarter as Duke opened a 10-0 lead at the end of one in the opener.

A focus heading into Clemson was getting the sophomore QB going a little sooner.

Didn’t happen: Armstrong was 1-of-9 passing in the first quarter Saturday night, his lone completion an 11-yard connection with Terrell Jana on a second-and-14 at the 6:17 mark.

“I think that’s just part of maturing and growing. It’s hard to even remember that’s how he started because he just was so competitive and did such a nice job down the stretch. I think that is going to be part of managing each team when we play them, the new looks they give, just calming down. And, yeah, we’ve made a clear intent to have manageable throws that he likes to begin with. But just going to take time, I think.”

We expected going in that the offensive line would be a building block for this team, given the experience coming back from 2019.

“Absolutely one of the bright spots of my journey here to the University of Virginia,” Mendenhall said of the improved line play, praising O line coach Garett Tujague.

Tujague “has worked so hard, and has taken his lumps, and has been working and growing and trying to get depth and trying to get the performance the way we, he and I, we all want it. And for the first time in going in, here in our fifth season, our offensive line, I would say is the cornerstone of why we’re having success as a program and as a football team and as an offense,” Mendenhall said.

“They’re blocking effectively in the run and the pass. They’re healthy. We’re deep. We’re adding Bobby (Haskins) back to it. And that’s when teams don’t just have good seasons, they become really good programs, and consistent and sustainable. It’s the biggest difference in our program from a year ago to this year, is the offensive line play.”

Senior lineman Dillon Reinkensmeyer attributed the difference and growth to a change in mindset.

“The attitude is that we go out there, we prepare, we practice really hard, we have a great game plan, we go out, we try to execute it to the fullest in our ability, and then it never hurts when everyone’s coming back then get experienced. I think there’s a lot of different factors that come into play for this year and why we started to play really well. But we know that we have hit nowhere near our ceiling,” Reinkensmeyer said.

“There’s just there’s so many guys competing for every different spot. A lot of guys can play multiple positions. And I think that kind of feeds off of itself. There’s no animosity between the line who plays and doesn’t play. We just want to put our best product out there on the field. And then we know that we’re going to rotate if guys get tired. So, guys know there’s opportunity. But I think, yeah, there’s a gigantic difference between when I first got here and then now, and I think that kind of speaks to Coach Mendenhall,” Reinkensmeyer said.

Mendenhall was asked to talk about Keytaon Thompson, the grad transfer from Mississippi State who competed in training camp for the QB1 job, and has gotten some snaps at wideout and tight end in special packages the first two weeks.

“He’s been remarkable,” said Mendenhall, and, sorry, forgot to mention, Thompson scored his first UVA touchdown Saturday night, on a 3-yard pass from Armstrong that pulled the ‘Hoos to 27-17.

“He mentioned at one point, this was week’s back, that he feels like a little kid again just playing football,” Mendenhall said. “Sometimes that happens, you know where you just need to restart, not only at a new place but maybe at a new position. He’s embraced the position, He’s learning, growing, developing. He’s big, he’s fast, and he’s physical. So, we’re still exploring what he can do. You’re right, we just saw some of what he can do. I don’t even know everything he can do, so the role is growing and it’s building. He’s on special teams as well, and not many quarterbacks have done that. So, he’s learning how to cover kicks and hold up players and punt and different things like that and he’s doing it with a smile. It’s just the beginning though, and to say that we know for sure what his role can be. It’s still at the front end of so many different things, but his attitude has been really, really positive.” 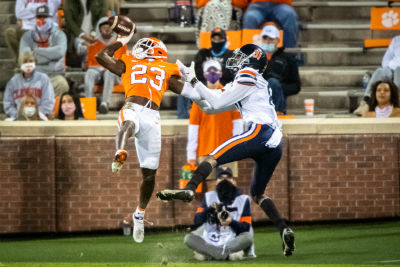 Both were targets on plays that, you hate to play the what-if game, but they catch the 50-50 balls, and it’s a dramatically different game.

“There’s a reason they call it 50/50. If you throw enough of those, then yeah there’s likely you get half,” Mendenhall said. “There’s two critical ones we didn’t get. One took a one-handed interception, and we’re teaching Lavel how to ensure that that ball isn’t caught by the defender, which was possible. Then we had a critical fourth down, we threw it up to Tony, and the ball got knocked away.

“Both of those are makeable plays in my opinion, either at least not have an interception or to come up with the catch. So, other plays were made, which is positive. The ones that aren’t caught, we just need to make sure they’re not intercepted, which is another component which we’re still teaching.”