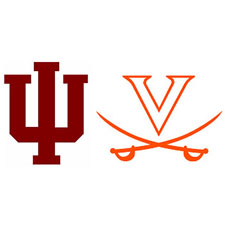 UVA football had the last chance, but a pass into the end zone fell incomplete, allowing Indiana to hold on for a 20-16 win in rainy Bloomington Saturday night.

The ‘Hoos (1-1) were outplayed all night long, allowing IU freshman tailback Stevie Scott to gash his way to 204 yards on 31 carries, as the Hoosiers (2-0) outgained Virginia 387-294, limiting Bryce Perkins to 106 yards passing on 24 pass attempts.

But it was Virginia with the last chance. Getting the ball back on a change of possession at its own 9 with 3:23 left, Perkins was able to finagle the Cavaliers inside the Indiana 30, after a pass-interference penalty on what had appeared to be a game-clinching Hoosier interception.

But a Perkins pass into the end zone on the game’s final play was not successful.

It felt like the ‘Hoos let one slip, despite the disadvantage in the stats. UVA scored on the game’s opening possession, a Perkins-to-Olamide Zaccheaus 1-yard TD pass capping an 11-play, 71-yard drive.

IU returned the favor, as Scott scored on a 40-yard run on a third-and-one, the third third-down conversion of the opening drive for Indiana.

Joe Reed fumbled on the ensuing kickoff, on what turned out to be the pivotal play of the night, setting up a quick Indiana scoring drive, capped by a Peyton Ramsey 9-yard TD pass to Donovan Hall.

Juan Thornhill blocked the PAT and returned it 98 yards for what went into the scorebook as a safety to leave the score at 13-9 afterward.

IU tacked on a Ramsey-to-Nick Westbrook 23-yard TD pass late in the second quarter to make it 20-9 Indiana at the break.

Perkins connected with Chris Sharp on a 20-yard TD pass at the 7:59 mark of the third quarter to cut the margin to 20-16.

That would be it for scoring for the night, though of course no one knew it at the time.

Perkins finished with 123 yards rushing on 25 attempts for Virginia, and completed 12 of his 24 pass attempts for the aforementioned 106 yards, with two touchdowns through the air.

Jordan Ellis had 63 yards on the ground on 12 carries.

Oladmide Zaccheaus had a team-best five catches, but gained just 15 yards on his receptions, and had two very noticeable drops.

This one will feel like a game that Virginia should have won. The Reed fumble led to a quick IU touchdown, and the final drive for Virginia could have been more, if the ‘Hoos hadn’t burned two timeouts in the third quarter because of substitution issues.

Gotta get the little things right.