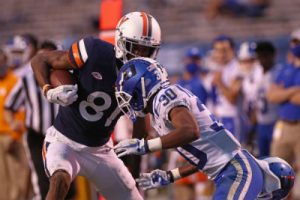 Playing in his first game, Davis, a true freshman, finished with four receptions for 101 yards highlighted by his first two career touchdown receptions, both coming in the fourth quarter. His first went for 18 yards and his second went for 26 yards. His yardage total (101 yards) was a school record for a Cavalier receiver making their collegiate debut.

Zandier, an inside linebacker, notched a career-high 15 tackles to lead a larcenous effort by the UVA defense. The Cavaliers picked off five Duke passes (tying a school record), recovered two fumbles and piled up five sacks. His tackle total was the most by an ACC player this season.

Zandier also had two tackles for loss and broke up a pass during the game. He led a UVA effort that limited Duke to just 56 rushing yards. Zandier’s previous tackling high was 10 against Ohio in 2018.