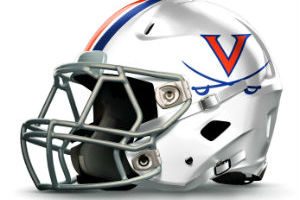 Olamide Zaccheaus was a security blanket for first-year UVA starting quarterback Bryce Perkins in 2018, hauling in 93 catches for 1,058 yards and nine touchdowns.

But Zaccheaus is now on his way to training camp with the NFL’s Atlanta Falcons, meaning Perkins and offensive coordinator Robert Anae have to figure out how to account for his absence.

It will be a committee approach, no doubt.

The good news is the second- and third-leading receivers from a year ago, Hasise Dubois (52 catches, 578 yards, five TDs) and Joe Reed (25 catches, 465 yards, seven TDs) are back.

You can expect to see Kelly alongside Reed on the same side of the line of scrimmage in three- and four-receiver sets that will give opposing defensive coordinators nightmares.

Dubois, at 6’3”, 215 pounds, has emerged as a reliable possession receiver, but he was a second option in that respect, to Zaccheaus, last season, so he will have to grow now being the primary target when there is the need to keep the chains moving in 2019.

The departure of the leading pass-catcher at tight end, Evan Butts (16 catches, 141 yards, two TDs in 2018), doesn’t lead you to think right off that Anae will try to make up for the loss of Zaccheaus by going more to the big guys in the middle of the field.

Jordan Ellis, who rushed for 1,037 yards as a senior last year, was the leading pass-catcher out of the backfield in 2018, with a modest seven receptions for 69 yards.

Anae will use his backs in the passing game. Remember back to 2016, his first season in Charlottesville, when he had Taquan Mizzell, now in the NFL with the Chicago Bears, who hauled in 52 passes for 404 yards as a senior, while leading the ‘Hoos with 994 yards rushing.

That may have been a marriage of necessity – i.e. a lack of talent at wideout – and also Mizzell being a special talent.