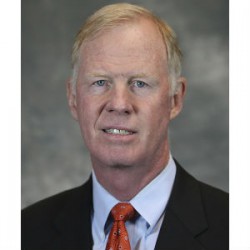 “I want to thank Mike London for giving me the opportunity to come back and coach at Virginia,” O’Brien said. “It is a great university and I have a lot of wonderful memories from my time here with him and with Coach Welsh. I would be remiss if I did not thank the most important people in my life – my wife Jennifer, and our children Colleen, Daniel and Bridget. They were very loving and supportive throughout this entire journey. Through thick and thin, they were always there for me.”

A 1971 graduate of the Naval Academy, O’Brien spent nine years in the Marines. He got his start in coaching in 1975 when he returned to Annapolis as a Marine officer assigned to Hall of Fame coach George Welsh’s staff. In 1980, he resigned his commission and was hired by Welsh as a full-time assistant coach.

O’Brien followed Welsh to Charlottesville in 1982 and spent 13 of the next 15 seasons guiding the Virginia offensive line. From 1991-96 O’Brien also served as offensive coordinator for the Cavaliers, coaching the UVa quarterbacks for the 1991 and 1992 seasons.  In those 15 years Virginia had winning seasons 12 times, won four bowl games and was ACC co-champions twice.

As a head coach, O’Brien turned around programs at Boston College (1997-2006) and NC State (2007-2012), posting a combined record of 115-80 at those two institutions. His 75-45 record at Boston College was the most wins by a coach in the Eagles’ history, and included nine-win seasons in four of his final five years on Chestnut Hill.

O’Brien returned to Charlottesville for the 2013 and 2014 seasons as Virginia’s associate head coach for offense and tight ends coach.

“It’s been a pleasure to reunite with Tom the last two seasons,” said Virginia head coach Mike London. “I was very happy that he and his wife, Jenny, decided to return to Charlottesville and UVa for the finalyears of his coaching career. He was a great mentor when I was on his staff at Boston College and someone I respect tremendously. His retirement is a loss for college football. Tom is a coach who has always done things the right way, stood by his principles and instilled great values in the players he has coached. He’s done all of that while being very successful.”

“I’ve been blessed to have two great careers,” O’Brien said. “First, in the United States Marine Corps, and for the last 40 years, working in college football. It has been a privilege to work with so many great coaches, support staff and administrators during my career.

“The most satisfying part of coaching has been our players. To work with all of these young men, to watch them grow and mature and begin careers and start families has been very gratifying. I appreciate the commitment and dedication they each made to reach our team goals everywhere I coached.”