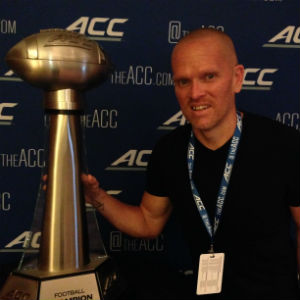 You can look back at the 2018 UVA football season a couple of different ways.

The way we’re looking back on it now is, the ‘Hoos were two plays away from a 10-win season, considering the overtime losses at Georgia Tech and at Virginia Tech in November, both games that you left feeling were games the good guys had in the bag, should have won, somehow gave away.

The narrative would be different, though, you have to assume, had the Belk Bowl beatdown of South Carolina not happened.

Virginia is getting an awful lot of love going into 2019 because of that 28-0 win, deservedly so, because, that one was impressive.

The bowl win put a nice bow on a season that came to feel, with the way things ended, like a slow build toward something special.

It didn’t start out that way. Honestly, nobody was thinking bowl after a Week 2 loss at Indiana, which would go on to finish 5-7, 2-7 in the Big 10.

The turning point came in mid-October, in a 16-13 win in Charlottesville over Miami, the preseason favorite in the Coastal Division, which came to Scott Stadium on a five-game winning streak, and ranked 16th in the nation.

As big as that win was for UVA, though, when you look back on it, Miami would go on to finish 7-6 on its way to a coaching change.

Two other Coastal Division foes – North Carolina and Georgia Tech – were also destined to make coaching changes after the season.

The Cavaliers split with them, beating UNC in October, and losing at Georgia Tech in November.

Virginia would also lose at Virginia Tech, which went on to post its first losing season in a quarter-century.

The win that has us all excited, in the bowl game, against an SEC team, brings with it its own meh factor.

South Carolina, after all, finished 7-6, its most significant win being, what, maybe Missouri?

But, hey, it was a win, in a bowl game, against an SEC team. That qualifies as tailwind.

And it’s tailwind into a 2019 schedule that looks quite favorable, particularly early.

You start at Pitt, which has to replace four starters from its dominating offensive line of a year ago, then you get a Florida State team coming off a losing season two weeks later.

If things go as expected, you win those two, you beat William & Mary and ODU, and you head to Top 10 Notre Dame on Sept. 28 undefeated and almost certainly ranked.

The key to a successful 2019 isn’t going to South Bend and pulling a massive upset. Sure, it would be nice, but honestly, it’s more important that you get back for the bye week as healthy as possible.

The biggest game of the year is actually the next one, at Miami on a Friday night, Oct. 11. Get the W there, and you get back on the plane the favorite to represent the Coastal in Charlotte.

And, mind you, you do that, and you still haven’t really done much worth writing home about.

Pitt is depleted, FSU is a shadow of its former self, Miami seems forever destined to do nothing in the ACC.

And yet, you play your cards right, and you’re playing Virginia Tech on Black Friday in Charlottesville with a good shot at breaking that long losing streak on your way to a date with Clemson in Charlotte a week later.

Funny thing, but that blowout win over a middling South Carolina team in Charlotte back in December might be a big reason why we see UVA football get over the hump in 2019.

It’s certainly hard to imagine that we’d been thinking these thoughts out loud had that game turned out differently.

Again, funny how things work out.