UVA fans: Get over your dumb Kihei Clark hate already 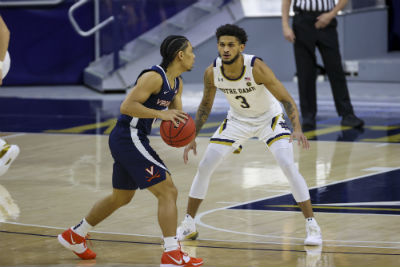 Kihei Clark is the most polarizing UVA Basketball figure in recent memory. You either think he’s the greatest thing since sliced bread, or you wonder whatever it is that Tony Bennett sees in him.

Bennett told reporters before the national championship celebration last fall that the biggest shot of the 2019 title run was Clark’s three just before the half in the opening-round win over Gardner-Webb.

Which says a lot, because there was the play that none of us will ever forget from the Elite Eight win over Purdue, that had Clark chasing down a back tap into the backcourt, before finding Mamadi Diakite for a buzzer-beater that sent that game to OT, ahead of the win that put UVA in the Final Four.

All of us with our T-shirts and hats and banners hanging outside our front doors owe the 5’9” kid whose only other offer came from UC-Davis … everything, in terms of our UVA fandom.

But fandom is a bit of the old Janet Jackson song.

“What have you done for me lately?”

Clark, lately, had struggled. Bennett benched him after a rough outing in Virginia’s 61-60 loss to middling San Francisco last month.

Then after Clark played his way back into the starting lineup, he had that ghastly six-turnover game against Gonzaga in an awful, embarrassing 98-75 loss.

The future is so clearly Reece Beekman, the Top 50 national recruit, who just looks so … smooth.

Come on, Tony, the louder folks in the fan base have been imploring.

And then Kihei goes out and does what Kihei does.

Dammit. Kid did it to us again.

“He showed up, and he was tough,” Bennett said of Clark, after Virginia’s gritty 66-57 road win at Notre Dame Wednesday night.

Remember, kid is 5’9”, but he was getting the ball in the post – one of his jumpers was a post entry pass that had him turning and hit a face-up jumper reminiscent of the Anthony Gill days.

One of his assists was a post entry pass that he flicked with his left hand to Jay Huff for a flush.

“At times we threw it to him in the post, and he can make some plays, whether it’s for himself or create for others,” Bennett said.

Again, the kid is 5’9”, and Bennett is drawing up plays to get him the ball on post-ups.

Basketball in the second decade of the 21st century is so odd. The little guys are in the lane creating for big guys like 6’8” Sam Hauser and 7’1” Jay Huff on the perimeter.

“When we’re in three-game, and we got two guys on the wing and me, Sam and Jay are moving around. You can get catches anywhere in the middle, so whether it’s up top or in the post, once I get in the post, I just take my time and I’m just trying to work on it,” Clark said.

“We work on it a lot in practice, something that we worked on in the past, so we call it the playmaker spot. Just trying to pick my spots during the offense, and just being aggressive and taking with the defense gives me.”

Those of you who don’t understand why Bennett loves this kid aren’t going to like hearing that Bennett is doubling down on relying on Clark.

“Our scoring and shooting, it’s coming from some more of the interior, and Kihei, and that’s why we did some things offensively, to try to feature them and put them in situations, and then hopefully more guys will step up,” the coach said postgame.