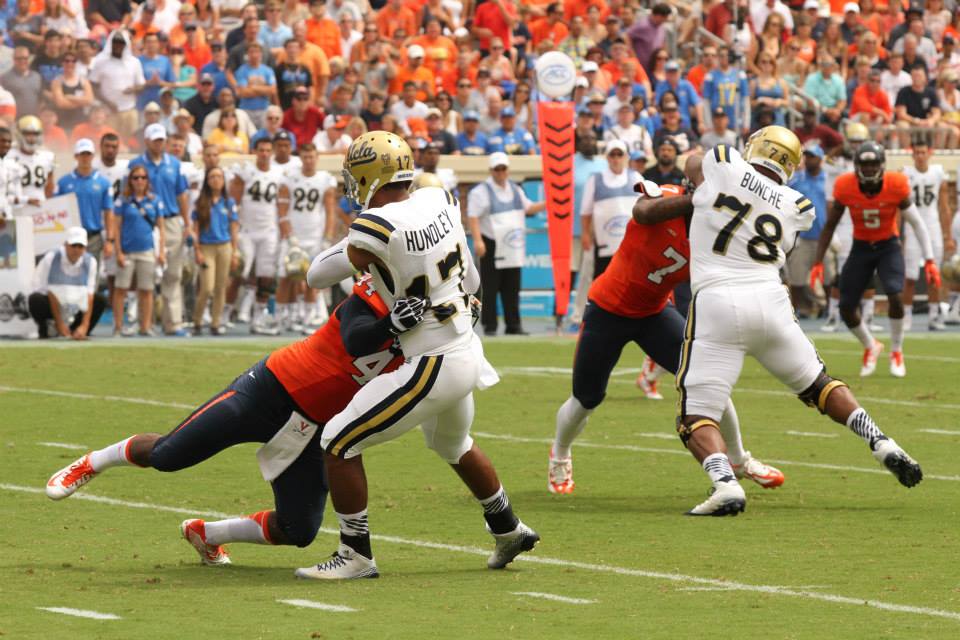 UVA is a 19- to 20-point underdog heading into its season opener Saturday at #13 UCLA. Interesting, when you think that the Bruins might have a hard time scoring 19 or 20 points.

If not for a big hand from Greyson Lambert, the 2014 starting quarterback, who lost the starting job in spring, transferred out and is now the starter at #9 Georgia (‘Dawgs, beware), UCLA doesn’t get past 20 in last season’s opener in Charlottesville.

The Bruins won that one, 28-20, but three defensive touchdowns, two on pick-sixes thrown by Lambert before he was lifted for Matt Johns, played a big role in that one.

UCLA scored once on offense with Brett Hundley, who entered the game as a Heisman candidate, and is now in the NFL as Aaron Rodgers’ backup in Green Bay, at the helm.

The 2015 Bruins have a lot of weapons on offense coming back, but the question mark is at quarterback, where the start goes to true freshman Josh Rosen, a top recruit in the recruiting class of 2015, who has all the tools and all the rest, but in the end is a true freshman being handed the keys to a complicated machine.

UCLA fans will say, OK, sure, we’ll just order up a steady diet of tailback Paul Perkins (251 carries, 1,575 yards, 9 TDs in 2014) and be OK, except that UVA defensive coordinator Jon Tenuta is also acutely aware that the Bruins are going to try to simplify things for Rosen by going to a steady diet of Paul Perkins.

Expect Tenuta to load the box on first and second down to take away Perkins, get the Bruins offense behind the chains and push Rosen on third-and-longs with an exotic mix of blitzes and coverage packages that will test the youngster more than he was tested on Friday nights this time last year.

For an idea of how effective Tenuta and the UVA defense can be at making life difficult for a quarterback, all you need to do is look back at last year’s season opener, when Hundley, who finished the season with a 152.7 passer rating, 22 touchdowns, five interceptions, a 69.1 percent completion rate, 8.0 yards per attempt, and was sacked 29 times in 13 games, had a 122.2 passer rating in the win over Virginia, completing 60.6 percent of his passes, with no touchdown passes, 7.3 yards per attempt, and he was sacked five times.

Hundley had developed happy-feet syndrome by the second quarter even as UCLA’s D was taking over the game with the pick-sixes, and he would only lead his unit on one sustained drive all day.

Expecting Rosen to have a better time of it on Saturday is wishful thinking at best.