UVA Basketball Season Preview: What is the ceiling for the ‘Hoos? 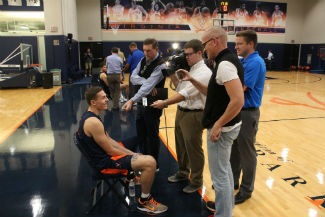 UVA basketball was getting a lot of early, early, early 2017-2018 love this past spring, including some national Top 10 buzz.

Then three players transferred out, and the bloom came off the rose, nationally, anyway.

But here’s the real deal about this year’s Virginia basketball team. There is arguably more talent in coach Tony Bennett’s rotation than he’s ever had, and yes, I realize that’s saying an awful lot, considering the recent run of success.

The one caveat there: a lot of the talent that Bennett has at his disposal this year is young and still figuring out the Pack Line and mover-blocker.

Which is where seniors Devon Hall and Isaiah Wilkins will be key.

Wilkins (6.8 ppg, 6.0 rebs/g in 2016-2017) is the backbone in the post, an All-ACC Defensive Team selection who has the ability to hit jumpers out to 17 feet and score on dribble-drives, but has yet to show much in the way of a back-to-the-basket post game that Virginia is sorely lacking.

Sophomore Mamadi Diakite (3.8 ppg, 54.3% from the field) is an athletic 6’9” with ability, like Wilkins, on the pick-and-pop out to 17 feet. Redshirt freshman Jay Huff, at 7’1”, 230, is getting a lot of preseason attention with reports about his athleticism on both ends of the floor, as a shot blocker on defense and a skill set on offense that includes three-point range jumpers and the ability to dribble-drive from the perimeter into the lane.

Junior Jack Salt (3.7 ppg, 4.1 rebs/g) is a Bennett favorite for his physicality at 6’10”, 250, as a supreme screener in the mover-blocker, and a stout defender against opposing bigs on the back end of the Pack Line.

Back to the points in the paint issue with the post guys for a moment: none of these guys have shown the ability to score on postups to this stage. Now, sure, the game, at both the college and NBA levels, has largely gotten away from the old school dump it into the paint on every possession jand let the bigs do their thing around the rim, but if you can’t get something out of the bigs in the paint, you’re at a disadvantage even accounting for the way the game is played today.

This was noticeable last season after Virginia lost Austin Nichols, a gifted post scorer, in November, leaving the ‘Hoos too reliant on their jump shooting.

Which gets us now back to the transfers. Marial Shayok (8.9 ppg last season), Darius Thompson (6.2 ppg) and Jarred Reuter (3.8 ppg) all announced in a span of a few days their intentions to transfer, sending shock waves through the fan base, which was left to wonder if it was a case of rats fleeing a sinking ship after UVA’s famous flameout in the NCAA Tournament in March, a dispiriting 65-39 second-round loss to Florida.

Look again at the nine-man rotation that Bennett has in place for 2017-2018. Huff and Hunter redshirted last season, but observers were noting early on that both were shining in practice even in reduced scout-team roles, and were headed to rotation roles this season.

And not to speak ill of the departed, but Shayok, the highest-profile transfer, was too inconsistent to rely on, seemingly as likely to put up a goose egg in the box score (he didn’t score in three games last season, and had four other games with one or two points) as he was to put up big numbers (he had 15 double-digit games in 2016-2017).

In his place, you get Johnson, who scored 20+ five times at Rutgers last season, and went for double figures 21 times in the Scarlet Knights’ 33 games.

Johnson will have to learn the Pack Line and mover-blocker pretty quick, and Hunter and Huff, who had redshirt years to pick up the nuances, will have to be able to translate what they learned in practice into live game situations in short order in their own right.

One thing to keep in mind is that the transition is not as easy as you might assume. I remember asking Anthony Gill, an elite back-to-the-basket scorer at the college level, back toward the end of his sophomore season at UVA about how hard it was to pick up the Bennett system, and he told me his role on both ends of the court didn’t really click with him until early February of that year, and this was after he’d had a redshirt season after transferring from South Carolina.

You saw Jerome and particularly Guy struggle at times last season, Guy most notably on the defensive end, where his 97.3 defensive rating was the worst among the Cavs’ regulars a year ago.

But Guy looks stronger, and according to the media guide, he’s added 10 pounds to his 6’2” frame, even accounting for the missing man-bun.

And Huff is almost a different person than when he arrived on Grounds, growing two inches (he’s now listed at 7’1”) and 40 pounds (going from a spindly 190 to a wiry 230).

They’re young, though. Of the guys in the expected nine-man rotation, you’ve got two redshirt seniors (Hall and Johnson), a fourth-year senior (Wilkins) and a fourth-year junior (Salt), then five freshmen and sophomores.

It is a talented group, but there will be some growing pains, particularly with a couple of early-season challenges, on the road at VCU in mid-November, at home against Wisconsin in the ACC-Big Ten Challenge, then on the road at West Virginia in December.

There will be some early Ls to keep any national buzz from enveloping the team before the ACC schedule starts, but don’t let that get you down if you’re a UVA fan.

The ceiling for this team is Final Four, assuming a few things.

Guy will need to develop a dribble-drive game to become as much a scorer as he is a shooter. Once he does that, he’s an All-American.

Jerome needs to continue to build on the Big Shot Ty reputation he earned for himself toward the end of his freshman season.

Huff will have to step into the role of being the guy in the post who puts points in the box score.

And Hall and Wilkins need to continue being the glue guys that they’ve been since their freshman seasons playing alongside the likes of future NBA players Malcolm Brogdon, Justin Anderson, Joe Harris and London Perrantes, and maybe pass on some of their grit to their younger, more wide-eyed teammates.

Final Four, again, is the ceiling for this group.