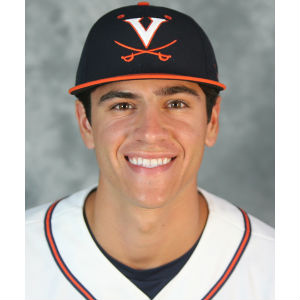 Adam Haseley, the weekend starting pitcher, is tied for the staff lead in wins with six and has a 3.28 ERA in 10 starts.

I’d say it’s a push as to which guy is more valuable right now.

Haseley the starting pitcher right now might get the slight edge, if only because Virginia (33-10, 12-9 ACC) is still trying to figure things out rotation-wise.

Derek Casey (3-1, 3.27 ERA) had taken over the Friday night spot, but after getting hit hard last week in a 10-9 win at Virginia Tech (four runs on six hits in three and two-thirds in a no-decision), coach Brian O’Connor went with Haseley to open the series against Notre Dame.

Haseley got the win in a 14-4 final, giving up two runs on four hits in six innings, striking out five and walking three.

Casey got knocked around again in game two, giving up four runs on four hits in two innings in taking his first loss of the season.

Noah Murdock (2-1, 3.00 ERA) has looked strong the past two weekends, giving UVA seven scoreless innings, giving up three hits, striking out three and not walking a batter in a no-decision in what turned into a 3-2 Cavs win at Virginia Tech last weekend, then pitching into the seventh in Virginia’s 9-0 win over Notre Dame on Saturday, giving up four hits in six and a third scoreless innings, striking out three and walking four.

Opening Day starter Daniel Lynch (6-2, 4.85 ERA) has rebounded of late since being demoted to the mid-week following the March 24 debacle at home against Duke (10 runs on 12 hits in two and a third).

Lynch has two wins in three starts since April 5, including a complete-game win over JMU last week.

So, with Lynch (nine starts) and Evan Sperling (3-2, 5.80 ERA, eight starts), O’Connor has options for the NCAA Tournament should the Cavs lose a game early the first weekend.

Bettinger is doing his best Artie Lewicki impersonation, averaging close to three innings per long-relief appearance, able to bridge from the middle innings to closer Tommy Doyle (1-1, 2.01 ERA, 11 saves, 23 Ks in 22.1 innings), or finish things up himself as needed.

The Bettinger emergence gets us back to the Haseley question, regarding his value. The weekend starting pitcher is still pretty valuable.

Haseley is the best hitter on the ACC’s best offense (UVA is hitting an ACC-best .326, leads the conference in on-base percentage at .408 and is third in slugging at .486).

Unlike the great UVA teams of years past, this Virginia team bludgeons opponents into submission, averaging 7.9 runs per game.

It’s a potent lineup, and Haseley is the key in the ignition.

Let’s just call him the national player of the year and move on, how about it?