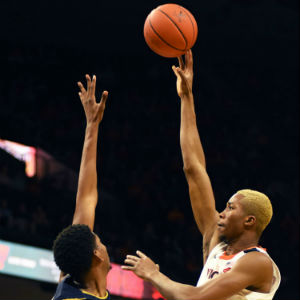 Mamadi Diakite had a game-high 20 points to lead Virginia. Photo by Dan Grogan.

Mamadi Diakite has reached a deal on a two-way contract with the Milwaukee Bucks, which will have the 6’9” power forward splitting time between the NBA club and the G-League’s Wisconsin Herd.

Diakite had gone undrafted after testing the NBA waters in the spring of 2019 ahead of returning to the University of Virginia for his redshirt senior season.

His limitations in the post – he scored an ugly 0.84 points per possession on post-ups last season, according to Synergy – are certainly a drawback.

Defensive chops: not a concern. Diakite, who has a 7’3” wingspan, is an elite rim protector (2.0 blocks per 36 minutes), and he is a plus defender against the pick-and-roll.

Diakite projects to be depth up front, a guy who can anchor your defense on the second unit, defending either post position, taking opponents’ second unit out of pick-and-rolls, and he’s not a liability on the offensive end when he’s out there.

For a guide on what Diakite can be for an NBA team, you can look at what he did for the 2019 national title team.

Diakite was a key contributor as a role player, and stepped up big-time in the NCAA Tournament, averaging 10.5 points, 8.2 rebounds and 2.7 blocks per game, shooting 60 percent from the floor.

At the absolute least, he gives you a few solid minutes a game, a guy who will make your bigs work and get better in practice, and a top-notch young man as a locker-room presence.