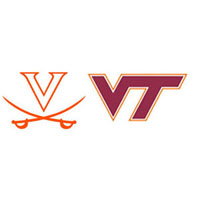 The Virginia football team has accepted an invitation to play Auburn from the Southeastern Conference in the 2011 Chick-fil-A Bowl at the Georgia Dome in Atlanta on Dec. 31. The game is scheduled to kickoff at 7:30 p.m. EST and will be televised nationally by ESPN.

The game will mark Virginia’s fourth appearance in the Chick-fil-A Bowl (formerly the Peach Bowl). The Cavaliers played their first-ever bowl game in Atlanta on. Dec. 31 in 1984, defeating Purdue27-24 to claim the Peach Bowl crown. Virginia defeated Georgia 34-27 in the1995 Peach Bowl and lost to the Bulldogs 35-33 in the 1998 Chick-fil-A Peach Bowl.

“This is outstanding for our football program and our players will be elated to meet the reigning national champions from Auburn in Atlanta at the Chick-fil-A Bowl,” said Virginia coach Mike London.  “No one on our roster has played in a bowl game, so what a fantastic opportunity and setting for them to do so for the first time. I want to congratulate coach Gene Chizik and the Auburnteam on another successful season in the very competitive SEC. We are looking forward to our game with the Tigers.”

The Cavaliers are 8-4 overall and 5-3 inthe ACC’s Coastal Division. This is UVa’s 18th overall bowl appearance and the first under second-year coach Mike London. Auburn is 7-5 and finished 4-4 in the SEC’s Western Division. This will be the third meeting between the two programs. The Tigers defeated the Cavaliers 28-17 in 1997 in Charlottesville. The following season Virginia handed Auburn a 19-0 defeat at Jordan-Hare Stadium.

For the first time in its 14 years in the Bowl Championship Series (BCS), the Atlantic Coast Conference has had two teams selected to participate in BCS Bowl games in the same year. Clemson, the 2011 Atlantic Coast Conference Champion and ranked 15th in this year’s final BCS Standings, will represent the league at this year’s Discover Orange Bowl, while ACC runner-up Virginia Tech, ranked 11th in the final BCS Standings, was chosen as an at-large selection by the Allstate Sugar Bowl.

Virginia Tech (11-2, 7-1 ACC) will be making its fourth appearance in the Allstate Sugar Bowl, having played Florida State in the 2000 game which served as the BCS national title contest; meeting Auburn in the 2004 game; and Texas in the 1995 Sugar Bowl classic.

Virginia Tech will be facing 13th-ranked Michigan (9-3) of the Big Ten Conference in a nationally televised (ESPN, 8:30 pm) game on Tuesday, Jan. 3, in New Orleans’ Louisiana Superdome. This year’s game will mark the first meeting between Virginia Tech and Michigan in football.

The Hokies, the ACC’s Coastal Division champion and ranked 11th in the final BCS  Standings, are making their 19th consecutive bowl appearance, all under the direction of coach Frank Beamer who is the active career leader in the NCAA’s FBS in coaching wins with 251. Virginia Tech dropped a 46-29 decision to unbeaten Florida State in the 2000 BCS Championship Game; lost to unbeaten Auburn 16-13 in 2004 contest and downed Texas 28-10 in the 1995 game.