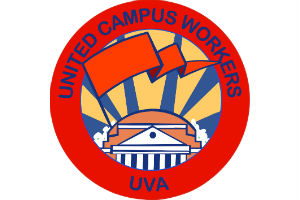 United Campus Workers of Virginia at UVA is partnering with student groups to solicit financial and in-kind donations to provide frontline campus workers with PPE and, in case of renewed furloughs and layoffs as the semester advances, emergency aid.

UVA Mutual Aid, UVA Young Democratic Socialists of America, and UCWVA-UVA are organizing this effort, which hopes to collect $3,000 by Sept. 16, to be extended as necessary.

UCWVA-UVA is also reiterating demands from its ongoing #ActFastUVA campaign for worker hazard pay and a firing freeze.

The announcement comes after reports from workers of limited and insufficient PPE after UVA’s Aug. 28th decision to press ahead with on-Grounds learning, and fears over firings and furloughs should UVA be forced to close due to rising COVID-19 cases.

“It is deeply concerning that workers are fearing for their jobs and personal health after all of UVA’s reassurances, and points to more of the same lack of transparency and preparedness which has defined the university’s response to this crisis,” UCWVA steering committee member Rosa Hamilton said. “And all of this after deciding to press ahead with in-person classes, a decision opposed by workers, students, and Charlottesville including UVA’s own Student Council, Mayor Nikuyah Walker and the Charlottesville Human Rights Commission, and UCWVA-UVA.”

The university has so far not announced plans to provide hazard pay for in-person workers or institute a firing freeze.

Financial donations are being accepted at UCWVA’s GoFundMe page until Sept. 16, to be extended as necessary. Those looking to make in-kind PPE donations should email UCWVA-UVA for drop-off info at ucwva@ucw-cwa.org.

University employees may get in touch at the same email address with any questions or requests for equipment.

All employees, whether employed by UVA directly or by a third party contractor, are eligible for aid.