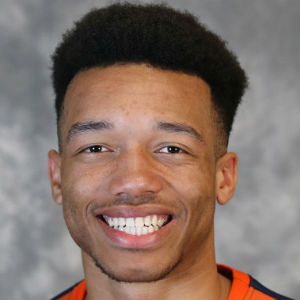 Virginia freshman guard Marco Anthony, heading into Wednesday’s game with Louisville, had played a total of six minutes in ACC play this season, all in what the kids call garbage time.

Only twice this season did Anthony get double-digit minutes, in UVA’s 93-49 win over Austin Peay on Nov. 13 and in the Cavaliers’ 78-47 win over Savannah State on Dec. 19.

We’re talking a total of 66 minutes all season long, none of them what you’d call meaningful, against top-flight teams at times in a game when the outcome was even close to being in doubt.

Then Anthony found himself the first guard off the bench for coach Tony Bennett when it was announced just before the tip that redshirt senior guard Nigel Johnson had been suspended for Virginia’s next three games, beginning with tonight’s game.

Anthony was ready for the opportunity.

Naturally, the kid that literally no one outside the Virginia huddle expected to even play performed beyond his years. Anthony checked in at the 11:53 mark, hit his first shot, a midrange jumper, at the 8:19 mark, then drained a three a minute and a half later.

After checking in at the 14:00 mark of the second half, he hit another three, then converted a muscular drive to the hoop at the 6:46 mark to push a nine-point ‘Hoos lead to 11.

Ten points, two threes, a tough drive and finish, 18 minutes of perimeter defense. Not bad for a guy who graduated from garbage time to meaningful minutes against the second-place team in the ACC.

“I think that’s such a hard spot to be in,” said sophomore guard Ty Jerome, who had 16 points and nine assists in the win. “He didn’t really play much all year, and to come in against a team like that and deliver like that, it’s amazing. I don’t think many people could do that. I told him how proud of him I was, that’s amazing right there.”

“Definitely not surprised,” was the sentiment expressed by sophomore guard Kyle Guy, who had a game-high 22 points in the win.

“I mean, he is just one of those guys that really waits his turn and bides his time and is ready to focus at all times,” Guy said. “I think you saw that on the court tonight. He is very strong, good with the ball, did not make too many turnovers. With his big frame, it is hard to take the ball from him. He was really sound tonight.”

Bennett told reporters after the game that he had informed the team that Johnson would be unavailable, which gave Anthony the chance to get himself ready.

“He prepared in that regard, and we got him some more reps in yesterday’s practice. Louisville is a tough team to get thrown into the fire in this setting, but he was very poised. That is a credit to him, and he is a fine young man,” Bennett said.

Elder statesman Devon Hall, a redshirt senior who seems to have been around since Thomas Jefferson, had similar high praise for the youngster.

“He works his butt off, so I’m so happy for him and to see him go out there and play that well,” said Hall, who had 12 points in the win. “I wasn’t really surprised because he works his butt off, and he always says ‘I’m just waiting on my moments,’ so he did a great job tonight. He helped us, big lift.”