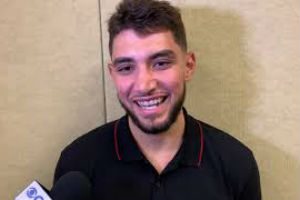 Phoenix Suns rookie Ty Jerome has been called up to the NBA squad after a rehab stint with the G-League.

Jerome, a 2019 UVA Hoops alum, played in two games for the Northern Arizona Suns, scoring 18 points on 6-of-8 shooting in 19 minutes in a 129-94 loss to Sioux Falls in his most recent game on Saturday.

That was Jerome’s first live action since suffering an ankle injury in practice on Oct. 21.

Jerome had looked good in preseason action with the Suns, averaging 6.8 points and 3.8 assists per game and shooting 45.8 percent from the floor in four games.

Phoenix is off to an 8-10 start this season. Ricky Rubio, signed as a free agent over the summer to take over as the starting point guard, missed five games dealing with back spasms, but he was back for the Suns’ two most recent games, losses at home to Washington and Dallas, averaging 19.5 points and 6.5 assists per game.

Jerome figures to slot in as the backup behind Rubio, who is averaging 30.6 minutes per game this season.

The Suns play next on Monday night at Charlotte.