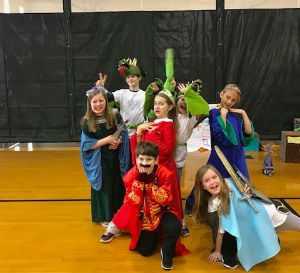 Two St. Anne’s-Belfield Destination Imagination teams will be traveling to Knoxville, Tenn. to compete in the Destination Imagination Global Finals Tournament from May 23-26. The Global DIsasters (fifth and sixth grade) and Dragon’s I (third and fourth grade) both advanced through the regional and state tournaments in order to qualify for the event.

Destination Imagination is an international program in which teams come together for a season of working on one of seven Challenges. The program is project-based, and so requires students to brainstorm, design, and create their solutions. Each year the Challenges are aligned to National Education Standards, STEM standards, and various Common Core standards. Challenges are offered in areas including technical, scientific, fine arts, improvisational, structural, and service learning.

DI competitions begin with a regional tournament, at which team solutions are assessed by a panel of trained appraisers, ranging from educators to artists to engineers. Each team solution is scored on a variety of elements, including originality, workmanship, presentation and teamwork. Teams with the highest scores advance to the affiliate (state or country) tournaments. Every year more than 200 tournaments take place around the world at the regional, state, and country levels. The top-tiered teams from the affiliate tournaments advance to the Global Finals.

The School’s teams have been working together since the start of the school year, coached by parents, and together developed a solution to a challenge and then presented their solution in a creative dramatization. In addition to refining their solutions, scripts, props, and acting, the teams have also spent the last few months fundraising for their trip to Knoxville.

Last year, the Global Finals attracted more than 8,000 students from more than 15 countries.