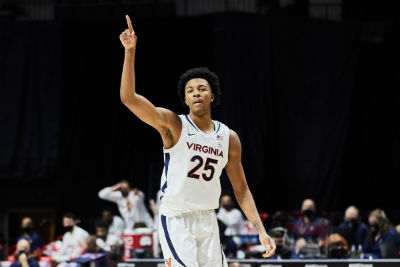 You knew about Sam Hauser, of course Jay Huff. You’d heard about Trey Murphy III, but didn’t know if he would play for #4 Virginia this season.

The program confirmed early Wednesday that Murphy had received a waiver from the NCAA that would allow him to suit up, and then he went and dropped 21 points on 7-of-9 shooting from the floor, 6-of-8 on threes, in an 89-54 ‘Hoos win over Towson in Bubbleville at the Mohegan Sun.

It really was that late in the process.

“We found out last night, right before our practice, that Trey had received his waiver and would be able to play, and we were very excited for him,” UVA coach Tony Bennett said.

Murphy had transferred from Rice in the spring with the idea in mind that he would take the 2020-2021 year as a redshirt year, but as the preseason started to play out, he approached Bennett about trying to play this season.

The late request obviously pushed things in terms of him getting in for the opener.

Murphy said Bennett pulled him aside before practice Tuesday and told him the good news.

“When Coach told me, I started smiling ear-to-ear. You couldn’t see it, because I was in my mask,” said Murphy, who got 18

A Hauser three sent Virginia into the halftime break up 42-19.