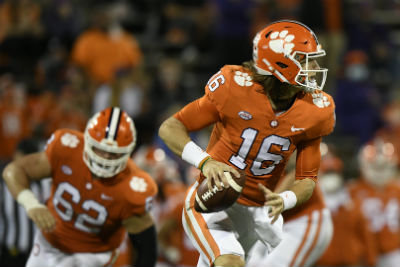 Clemson quarterback Trevor Lawrence was finally able to beat out teammate Travis Etienne for the ACC Football Player of the Year award.

You had just assumed that Lawrence, the presumptive top pick in next spring’s NFL Draft, had a closet full of every trophy imaginable, but this was the one that had eluded him, with Etienne, a tailback, named player of the year each of the past two seasons.

Named the MVP of the ACC Football Championship Game following Clemson’s 34-10 win over Notre Dame last Saturday, Lawrence has thrown for 2,753 yards and 22 touchdowns in nine games. He leads the ACC in total offense (329.3 yards per game), passing yards per game (305.9) and pass completion percentage (.692).

Also recognized as the 2020 ACC Offensive Player of the Year, Lawrence has rushed for an additional seven touchdowns this season, including a 34-yard run for a score in the ACC Championship Game.

The ACC Defensive Player of the Year recognition is the second major honor of the week for Owusu-Koramoah, who on Monday became the second consecutive ACC linebacker to be named winner of the Butkus Award.

Owusu-Koramoah has registered 56 tackles in 11 games, tying for the team lead on a unit that ranks second in the ACC in yards allowed (335.5 per game) and scoring defense (18.6 ppg).

A native of Hampton, Owusu-Koramoah has made 11 tackles for loss, including 1.5 quarterback sacks. He has forced three fumbles, recovered two (returning one for a touchdown) and has one interception this season.

Player of the Year

Offensive Player of the Year

Defensive Player of the Year