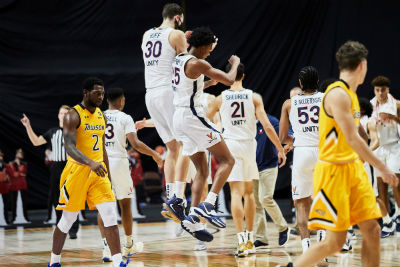 The plan had been that Rice transfer Trey Murphy III would sit out the 2020-2021 season, get bigger, stronger, learn the UVA system – which can be hard to pick up.

It was succession planning, really. Murphy, a 6’8” wing, would have two years of eligibility remaining, and he’d step in to fill the role that another transfer, Sam Hauser, would be expected to play for this year’s team.

But then you start thinking: remember how Braxton Key pressed the issue two years ago after transferring in from Alabama?

It’s not hard to think that Virginia doesn’t win that 2019 national championship if Key isn’t a rotation guy on that team.

And so it was that when Murphy approached Virginia coach Tony Bennett and let him know that he would like to try to get the clearance that he would need from the NCAA to be able to play this season, Bennett was 100 percent on board.

College basketball insider Jon Rothstein is fond of pointing out on Twitter as he reports news on these waiver requests being granted that “the NCAA continues to hand out waivers like they’re seedless watermelon at a 4th of July party.”

But still, until you get the word, you can never be sure when they’re going to run out of the seedless watermelon.

“We found out last night, or yesterday, before practice, that Trey received his waiver to play. We were so thankful for that and excited,” an understated Bennett said after #4 Virginia’s season-opening 89-54 win over Towson, in which Murphy scored a game-high 21 points on 7-of-9 shooting from the field, a torrid 6-of-8 from three-point range.

Murphy, obviously having learned the lay of the land in his few months on Grounds, was also understated in relaying his emotions upon receiving the news.

“Coach told me outside of the group. When he told me, I just started smiling from ear-to-ear. You couldn’t really see because I had a mask on,” Murphy said.

“Me and coach Bennett, we had a nice, nice time. Then I walked back into the room, and I feel like the team had a little bit of an idea, because they saw Coach Bennett, smile and they saw me smiling through my mask, and I was really happy. Then, after the game, I was happy but, just excited that my guys, that we got to play and all that good stuff.”

Key, when he was added to the mix on the 2018-2019 title team, was a complement to an established star, De’Andre Hunter, at the four, and gave Bennett ultimate lineup flexibility with his ability, along the lines of Hunter, to defend all five positions on the floor.

Murphy will, likewise, complement Hauser at the four, but the Murphy-Hauser tandem won’t be remembered for what they do on the defensive end.

Both can shoot the lights out.

Hauser was also 7-of-9 from the floor Wednesday, 3-of-3 from long-range.

Redshirt senior Jay Huff was 6-of-8 from the floor and 2-of-3 from three.

Actually, it’s not odd at all.

It’s the way basketball is played in the third decade of the 21st century.

Bigs don’t back their guys into the paint and shoot baby hooks and turnarounds. They set screens, slip off them as the guards touch the paint, and if the defense sags to stop the penetration, the big knocks down the open look.

“Yeah when we have at times, five guys on the floor that can scratch it, it opens up the court, hopefully gives us some driving opportunities,” Bennett said.

“Five guys open the floor, and we’ve been working hard on our guys. Always work hard. Everybody likes to shoot the three, but as long as the ball moves, and it’s a good shot, we’ll take it. That is a strength at times of ours, for sure.”

It’s a strength augmented by having another elite player on the wing who can catch-and-shoot as well as anybody in the country.

“It was just really exciting to play,” Murphy said. “We’re playing against each other for so long. We had been going at it for about four months or so. And it was just fun to play against other guys and play with my teammates. So that was the main thing.”