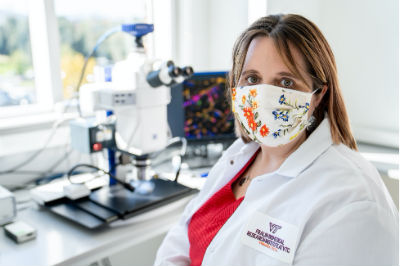 Jennifer Munson of the Fralin Biomedical Research Institute at VTC is one of a small number of investigators in the emerging field of fluid flow research in biomedicine, including cancer. Photo courtesy Virginia Tech.

As an undergraduate studying chemical engineering at Tulane University in New Orleans, near the heart of oil country, Jennifer Munson modeled how fluids move through pipes.

Five years later, she aimed that understanding at the human brain.

“The majority of our brain is water,” said Munson, an associate professor at the Fralin Biomedical Research Institute at VTC. “It just made sense to apply that kind of information.”

Today, Munson is a biomedical engineer and one of a handful of scientists examining how interstitial flow – the flow of fluids in the spaces surrounding cells within human tissues – can aggravate cancers, accelerate Alzheimer’s disease, and effectively deliver drugs.

“It’s kind of a force that’s always there,” Munson said. “Very few people are looking at how cells behave when you have fluid flow there. However, in our bodies, there’s always fluid moving around and through our tissues.”

Munson, who is also an associate professor in the Department of Biomedical Engineering and Mechanics in Virginia Tech’s College of Engineering, joined the Fralin Biomedical Research Institute’s primary faculty team this summer.

Munson’s lab develops tissue-engineered models that let the researchers study how fluid flows through and around cancerous tumors. She also developed a new way to use magnetic resonance imaging (MRI) to identify and track areas of fluid flow in and around brain tumors, including highly aggressive glioblastoma multiforme (GBM).

The fluid that flows around cells and through space between vessels in tissues is mostly water, with some proteins and sugars. A major purpose is to aid in the body’s immune response. When immune cells enter a tissue in response to a threat, they release large amounts of proteins and cytokines. Fluid flow helps to drain the proteins and cytokines away. When you cut your finger or twist your ankle and it swells, Munson said, that’s the fluid coming in to do its job.

Munson’s research has shown, however, that variations in the movement of fluid can be harmful.

“In cancer, we know that heightened fluid flows can facilitate tumor cells’ movements contributing to metastases. It can also activate the surrounding tissues, so the tumor cells are more prone to move towards it, or augment their ability to survive therapies,” Munson said. “In Alzheimer’s disease, we know that fluid flow slows down. It can cause poor waste removal, possibly contributing to the disruption of neural circuitry and attendant functions such as memory.”

That understanding, coupled with data from the lab’s models, may lead to development of nanoparticle therapeutics, perhaps at a personalized level.

Munson is part of a team of researchers from three universities that recently found using MRI-guided ultrasound and microbubbles to make tumors more porous increased fluid flow, allowing for more effective delivery of therapeutics via nanoparticles. The findings were published in May in Science Advances.

Among Munson’s most noted advances is the development of a method to use MRI to map and monitor fluid flow in tumors, identifying areas where cancer growth is more likely to occur. Her findings were published in APL Bioengineering in 2018.

Munson also works on the development of new engineering tissue models, including creation of a novel 3D model of GBM – for study of fluid flow. Her lab is currently working with researchers at the University of Virginia to build a model lymph node.

She and her team are also collaborating in conjunction with scientists in the Virginia Tech School of Neuroscience to translate research on fluid flow in brain tumors to the study of Alzheimer’s disease.

Munson grew up in Marietta, Georgia, with a machinist father and a mother who was a nurse, which fostered an interest in both health care and how things work.

After completing her bachelor’s degree at Tulane University, she worked for biotechnology company Genentech in San Francisco. She then joined Georgia Tech where she studied drug delivery for brain tumors. One year later, she won a Fulbright Fellowship to study at the Swiss Federal Institute of Technology in Lausanne, Switzerland.

She earned a doctoral degree in bioengineering from the Georgia Tech’s school of chemical engineering in 2011 and returned to the Swiss Federal Institute of Technology as a postdoctoral associate. It was in Switzerland that Munson began her research into fluid flow.

Moving to the Fralin Biomedical Research Institute, including locating her lab in the institute’s new expansion located at 4 Riverside Circle, provides her team an opportunity to expand their research and move into new phases, she said.

The main contribution she’d like to make is expanding interest in fluid flow among scientists.

“I want to have more people look at how cells act, and how drugs act and how tissues respond to changes in fluid flow, or even just if fluid flow is there,” she said.