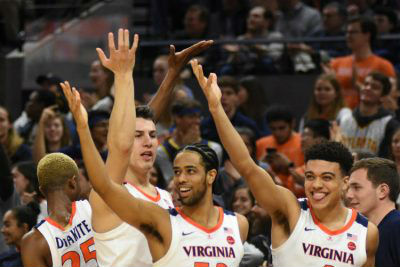 This was the first in the season-closing eight-game streak.

Braxton Key, after airballing his first free throw, hit back iron with the second, the ball bounding high into the air, then through the net.

That was with 2:04 left in the overtime.

And it would be the winning point.

The Cavaliers didn’t hit a basket from the floor in the OT, and the Irish had just one, a Prentiss Hubb 17-foot fadeaway with 3:31 to go.

“We battled and came up with a tough win,” coach Tony Bennett said after the game. “Both teams have been playing well, and I think are trending in the right direction. Maybe we didn’t play as well tonight, but both teams have been winning and on a good trend, so that was two teams that had some momentum. Home court got us one.”

But a Jordan Nwora three, off a Cardinals offensive rebound, ignited a torrid stretch in which Louisville hit 6-of-7 from the field, four of the makes threes, and this happened to coincide with a spot in which UVA only made one shot from the field, a Mamadi Diakite layup.

As the world turns, Louisville would not score again until a meaningless three from Samuell Williamson with three-tenths of a second left.

Diakite hit the back end of a two-shot foul with 1:48 to go to put UVA back on top.

The teams traded empty possessions, and Clark, working off a Jay Huff high screen, found daylight on the right wing, and drained the open three, to put the Cavaliers up four, 55-51.

Perry missed from three on the other end, and then after Diakite missed the front end of a one-and-one, the Virginia D forced another miss on a Williamson three with seven seconds left.

Diakite banged in two free throws with 3.8 seconds left ahead of the meaningless three at the end.

Kihei Clark fought his ass off, and because he did, Virginia got a massive upset win over #5 Florida State.

A Clark driving layup with a minute to go put UVA ahead to stay, and the ‘Hoos closed things out on defense and at the foul line to complete a 61-56 win Tuesday night in JPJ.

Virginia trailed 56-53 after a Devin Vassell jumper with 2:13 to go, but that would be it for the ‘Noles, who missed their last four shots, including a pair of potential game-tying threes in the final seconds.

The Clark dribble-drive put Virginia ahead, then the Virginia D forced a Vassell miss with 35 seconds left, with Huff pulling down the rebound in traffic.

FSU fouled Diakite with 13.9 seconds to go, and he converted two free throws to push the lead to three.

Wyatt Wilkes missed badly on a three from left of the key, but FSU was able to track down the loose ball and get one last look from three from Trent Forrest, who put up an airball from the left corner.

A pair of Braxton Key free throws with a tenth of a second left closed out the scoring.

This is where the season turned. Earlier in the week, the ‘Hoos had lost at home to N.C. State, their fourth loss in five games, dropping them to 12-6 overall, 4-4 in the ACC.

This one, for a bit, looked like things getting worse.

Wake Forest led by 12 with 17:36 to go, but defense and Tomas Woldetensae would come to define this one.

The Demon Deacons would score just 13 points over the next 17:35, needing three free throws on a chintzy call on Casey Morsell, who was whistled for a foul on Andrien White behind the arc with 1.7 seconds left, to extend the game to overtime.

White made all three to force the extra period, where a Woldetensae three with 3:55 left gave Virginia the lead for good.

The JUCO transfer was 7-of-14 from three-point range on the afternoon to finish with a career-high 21 points in 43 minutes.

He also assisted on a big three from the left corner by Jay Huff that put Virginia on top in the final minute of regulation.

There were doubts among the fan base, and definitely the national sports cognoscenti, that Virginia’s late-season run was so much fluff.

This one dispelled all of that.

And this one was all Jay Huff.

Huff blocked 10 Duke shots, the 10th on a potential go-ahead shot by Vernon Carey with five seconds left, and had 15 points on 7-of-9 shooting and nine rebounds, missing a triple-double by just the one rebound.

The big play, the ‘Hoos up one, 51-50, was the block on Carey, who had slipped open on a high screen and roll.

Tre Jones found Carey all alone under the basket, but Carey fumbled the pass slightly, allowing Mamadi Diakite, who had 14 points for Virginia, to recover enough to make Carey pump-fake.

The pump-fake gave Huff time to get back into the picture defensively, and the 7’1″ junior swatted away the short jumper, corralled the loose ball, and was fouled by Carey.

Huff made the second of the two-shot foul, giving Duke a chance to tie or win.

Jones, who finished with 17 points, actually got a decent look from about 25 feet at the buzzer, and the shot was on line, but hit the back iron and bounded off.

On UVA’s next possession, Diakite got the ball in the lane, bumped into a Duke defender, then converted a short jumper with 37 seconds left that put the ‘Hoos back on top, 51-50.

Jones missed a contested jumper with 21 seconds left, and Key, sent to the line, missed the front end of a one-and-one, to keep the door open.

After a Duke timeout, Huff snuffed out Carey to set up the dramatic endgame.