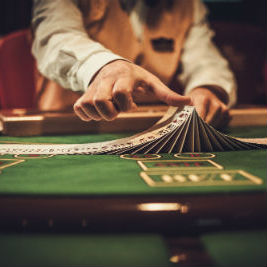 With roots dating back to a card game played by the Chinese emperor in the 10th century, poker has a long history and has seen a great many people try and master its art. It’s a casino game of cards, and a game of bluff, and some people have proven to be so good at it that their skills have made it to the history books. Over the last few decades, some people have played such good games that they have gone down as some of the best poker players in history and today we are looking at five of those people.

Despite only being born in 1974, Daniel Negreanu has definitely earned his space in the list of the top poker players in history. From Canada, Negreanu is a professional player who, at the time of writing this blog post, has won six World Series of Poker games, and two championship titles from the World Poker Tour. In 2014, Negreanu was also considered the best poker player of the whole decade according to the Global Poker Index.

In 2019, he became the third biggest winner of live poker tournaments of all time, having earned $42 million in prizes.

His exceptional poker skills have put him in the history books, along with his support for charitable events and organizations like @Ante Up for Africa”, which helps needy people in Darfur.

Born in 1953, Stu Ungar was a professional poker player. He was known as “the Comeback Kid” and was considered by many to be the best Texas Hold ‘Em player in history. Ungar was also one of only two people in all of history to win the main event of the World Series of Poker three times.

Ungar was so good at the game because of the expert timing of his bluffs, and his notoriously aggressive style of play. His method was described as having his chips in constant motion, and he was thought to be so good he might as well have been able to see his opponent’s cards.

Doyle Brunson, known as Texas Dolly, was born in 1933 and played poker professionally for more than 50 years. He won the main event of the World Series of Poker two times and has authored several books on poker and his experience playing it.

Brunson sealed his fate as one of the most legendary poker players of all time when he became the first-ever person to win $1 million in tournaments, and over his career he won 10 bracelets from the World Series of Poker. On his last day of playing, after announcing his retirement from poker in 2018, Brunson entered a $10,000 play and won $43,963 when he came in sixth place.

Born in 1964, Phil Hellmuth is another modern-day Poker legend who will go down as one of the best casino players in history. He is an American who plays poker professionally and has won fifteen bracelets from the World Series of Poker – a record. He has also won the main event of the World Series of Poker Europe in 2012, and in 2007 he was inducted into the Poker Hall of Fame by the WSOP.

Johnny Moss, who died in 1995 at the age of 88, was a professional American poker player who won the main event of the World Series of Poker for the very first time. In 1979, he was inducted into the Poker Hall of Fame.

Moss was also one of the first big winners in poker, winning between $2 million and $4 million in a five-month-long marathon game in 1949. In his last tournament in 1988, he won $116,400. He also set the record for being the oldest recipient of the WSOP bracelet.

There are many other famous poker players, with new names appearing all the time. These top five are just some of the greats, and you’ll be sure to find lots of other inspiring tales of people making their way up the ladder of success and becoming poker pros.