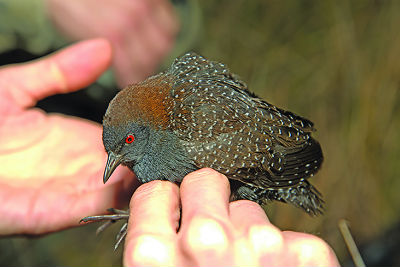 Just five decades ago, Elliott Island on Maryland’s Eastern Shore was a global hotspot for avid birders who wanted to add the diminutive eastern black rail to their life lists.

Scores of the birds nested in the low-lying marshes of Dorchester County, and birders in wee hours of the morning could hear — though often not see — the distinctive “kickee-doo” call of the ground-nesting bird.

But no black rails have been found there in years — or anyplace else around the Chesapeake Bay — as sea level rise has drowned their nesting sites. The sparrow-size bird has also vanished from much of its historic habitat along the East Coast and is rapidly declining in most of the areas where it remains.

As a result, the U.S. Fish and Wildlife Service on Oct. 7 listed the eastern black rail as “threatened” under the Endangered Species Act.

“It should have happened before, but that’s just not the way these things work,” said Bryan Watts, director of the Center for Conservation Biology at the College of William and Mary and Virginia Commonwealth University, who has surveyed black rails for decades throughout much of their range. “This species is in pretty sad shape at the moment.”

Indeed. In its decision, the Fish and Wildlife Service cautioned that there is a “high probability” the species could be gone altogether by 2068.

Watts said no black rails have been detected around the Chesapeake in recent years, though individuals have occasionally been spotted in Maryland wetlands farther inland.

Black rails were once found from Texas up the East Coast as far as Massachusetts. Over time, they have suffered major habitat loss as marshes were buried to make way for urban growth. Places such as Cambridge, MA; Queens, NY; Atlantic City, NJ; and Baltimore once supported black rails. The historic ditching and draining of marshes on the Bay’s Eastern Shore eliminated more habitat.

Now, black rails are primarily found in South Carolina and farther south. The strongest populations are in southern Florida and along the Texas coast, where hundreds of the birds still persist.

“It’s likely that Florida and Texas support a very high percentage of the current population,” said Watts, who has conducted surveys in those areas in recent years. “It may be sort of a last stronghold throughout the range, at least for the foreseeable future.”

Black rails live in shallow wetlands with slow-moving, but not stagnant, water. They build nests on clumps of grasses that rise just above water level and which have protective brush overhead.

In recent decades, most remaining birds have been confined to the upper reaches of undisturbed tidal marshes. But those areas are now rapidly being drowned by rising water levels and more frequent storms, which inundate their nests.

“The situation has become more and more clear over time. Sea level rise unquestionably is what has precipitated the catastrophic decline,” Watts said. “It’s undeniable as to what’s going on here.”

A few scattered populations are found farther inland, but they are small and mainly in the Great Plains of Colorado and Kansas. It’s unknown how many birds may once have nested in inland wetlands, but over time much of that habitat has been drained, mowed, harvested for hay or periodically burned to reduce woody growth.

The threatened species listing will help protect areas known to have black rails from activities such as mowing or managed burns that harm their remaining habitat.

But the Fish and Wildlife Service declined to identify specific locations that provide critical habitat for black rails. The service said such action was “not prudent” because identification of such areas could lead to trespassing by birders on private lands and on areas of public land that are closed to public access, as well as the trampling of the birds’ habitat.

The failure to designate critical habitat was criticized by the nonprofit Center for Biological Diversity, which had originally petitioned the federal agency to protect the bird in 2010.

“After a decade of being ignored, these shy, fascinating birds are finally getting some much-needed protections,” said Stephanie Kurose, senior endangered species policy specialist at the Center for Biological Diversity.

“But federal officials’ refusal to designate critical habitat is a big blow to these little creatures,” she added. “If the rail is going to have any chance of survival, we must protect the coastal wetlands where it lives from polluting industries, urban sprawl and increasing sea level rise.”

The Fish and Wildlife Service will develop a recovery strategy for black rails over the next three years. But with rising sea levels, Watts said survival of the birds may depend on finding or creating suitable wetlands in inland areas.