Tony Bennett talks up Gonzaga ahead of heavyweight matchup 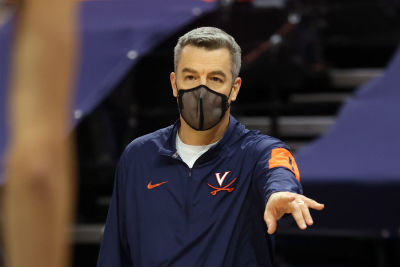 “I don’t know when you play a team as talented and as explosive as Gonzaga, I don’t know what prepares you for that,” Bennett said after his UVA team had just dispatched William & Mary, 76-40, on Tuesday, in its first game in 18 days, following a COVID-19 quarantine break.

The champs had to miss out on scheduled matchups with #4 Michigan State and #6 Villanova because of the lockdown – so Bennett went out and found a game with the top-ranked ‘Zags to fill out the non-conference schedule.

Credit to both Bennett and Gonzaga coach Mark Few for making the game between the defending champs and this year’s #1 happen.

Should be an interesting sight – a clash of styles not unlike a hyped boxing or MMA title fight, featuring the lithe, lightning-fast ‘Zags and the deliberate, at times exhausting ‘Hoos.

Gonzaga already has some notable pelts in its collection in 2020 – wins over Kansas, WVU and Iowa, in which the ‘Zags averaged 96 points per game.

“I know how good they are, and I know what we’ll have to do at a very high level to be in a game like that and make it competitive and hopefully be successful,” Bennett said.

OK, coach, they’re good, but – “make it competitive and hopefully be successful”?

I keep using the words, but Virginia – the champs – has what Gonzaga and Few desperately want, that banner hanging from the rafters.

The reason it’s there is Bennett’s famed five pillars, the first of which is that word, humility, and it’s not difficult to conjure up humility with his group at this still early stage in 2020.

Virginia wasn’t even this acclaimed coming into a season back two years ago when it was on its way to winning a national title – coming in ranked preseason #4 nationally, universally acclaimed as the prohibitive favorite to win the ACC.

A 61-60 loss to a mediocre San Francisco team in the second game of the season took some of the shine off, and then a middling 71-64 OT win over Kent State on Dec. 4 got more heads scratching.

It was just William & Mary – no disrespect to W&M, but the Tribe was picked to finish dead last in the not what it once was CAA – but the break seemed to do the Cavaliers some good.

The offense averaged 1.33 points per possession, attacked the paint (shooting 17-of-22 on layups and dunks), didn’t shoot all that well from three (9-of-26) – but it was on the defensive end that things looked and felt different.

Virginia held the Tribe to 14 points in the first half, actually par for the course for 2020 – the first four opponents had averaged 19 first-half points coming in.

Where things had been breaking down was in the second 20 minutes – opponents had been lighting up the vaunted Pack Line for 38.3 second-half points.

When William & Mary came out and scored 11 points in the opening 5:04, it looked like this was going to continue to be a recurring issue.

Sam Hauser and Tomas Woldetensae are known for being able to shoot the three, but they made their presence felt on the back end of the pick-and-roll defense.

Trey Murphy III also gets your attention because of his ability to shoot and get into the lane, but he earned praise from Bennett for what he did on the defensive end.

“I thought he was locked in, and he slid well today, bothered some shots, snatched some rebounds. You know he can stretch the defense with his shooting, and he’s a multiple position player, can guard different positions,” Bennett said.

Translation: Murphy got his first start of the season on Tuesday, and it won’t be his last.

Murphy at 6’9” gives Virginia the kind of starting lineup that Al McGuire used to say looked good in the airport – OK, Kihei Clark, at 5’9”, looks like the manager, but his backcourt mates are then Murphy, Woldetensae at 6’5”, and the frontcourt is Hauser at 6’8” and Jay Huff at 7’1”.

Both will go nine or ten deep.

The one is fast, the other … pensive.

“You’ve got to take care of the ball, but you don’t back down. You run your stuff hard, you go against them,” Bennett said. “I’ve been fortunate enough as a coach at Washington State to play against the good Gonzaga teams. We had great battles, and they’ve done a really great job with having threats offensively, they’ve always been good all over the court. Inside, outside, quickness, and so again it tests what you do.

“You always try to have a program or a team that prepares to play against the best, and we will have to be you at our best with not a ton of prep or a lot of games, but again, grateful for this opportunity.”