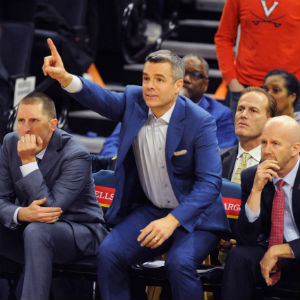 Virginia Tech managed just 11 points in the first half, on 5-of-24 shooting. Tony Bennett wasn’t at all comfortable in the locker room.

“We had a good stretch of defense, but they were a little cold and didn’t make those shots,” said Bennett after his team’s 56-53 win.

And honestly, those numbers seem off, because it felt like Tech was making everything it threw in the direction of the rim in the final 20 minutes.

“You knew they were going to make a run here, and they started attacking and made some long 3s. A few of them were contested and on a few of them we had some breakdowns because they were running good actions. So, give credit to how they attacked and what they did,” Bennett said.

“We had great shots in the first half, and had the same shots in the second that we had in the first. We just happened to get the second half shots to go down,” said Young, whose team has now lost eight of its last nine, to fall out of contention for an NCAA bid, maybe all the way down to having to play on Tuesday in the ACC Tournament in a couple of weeks.

But getting there hasn’t been easy, even as the ‘Hoos have now won eight of their last nine.

Up 26-11 at the break, the extended hot streak from Tech put the home team ahead by three inside of three minutes to go.

Virginia was finally able to get the clamps back on, closing on an 8-2 run.

In this recent hot streak, UVA has two overtime wins (Wake Forest and Notre Dame), a pair of wins in games that came down to the last possession (Pitt and Virginia Tech), a five-point win over Florida State, a seven-point win over Clemson, and one relatively easy 13-point win over Boston College.

“We’ve been in so many of those. I don’t think our guys have a problem with that. They have a steadiness about them,” Bennett said.

It’s almost like you expect the opponent to make a run, and Bennett acknowledged as much.

“When they got the lead, this place got very loud. Our guys responded well,” Bennett said.

Bennett on the game-winning three

A Tyrece Radford layup tied the game at 53 with 11 seconds left.

Bennett decided not to use a timeout, allowing point guard Kihei Clark to create.

Clark ended up creating a shot for himself, with a crossover that gave him a sliver of space for an open three, which he drained with 2.6 seconds left.

“Sometimes we call timeouts, sometimes I decide not to, and thank goodness I didn’t,” Bennett said afterward. “They [Virginia Tech] could’ve set it up, the score was tied, and sometimes it’s just better to let a guy get momentum and attack. Kihei backed the guy up and what a beautiful, beautiful three. He’s a winner, and I’ve said that often.

“I kind of challenged him – I didn’t think he had the greatest second half with some of his defensive things, but he responded the right way with the way he played, and we needed every ounce of it,” Bennett said.