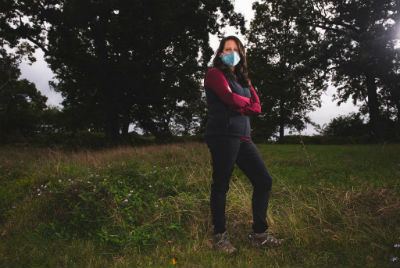 Korine Kolivras, who specializes in medical geography, has been researching the southward expansion of Lyme disease for over a decade. Photo by Ryan Young, Virginia Tech.

Picture a residential neighborhood, the houses built on acres of former farmland. Nearby, a few grassy areas are left to grow wild, allowing birds and small mammals places to shelter.

Past the houses are patches of forest with trails where people can see deer and the occasional fox.

According to Professor Korine Kolivras of the College of Natural Resources and Environment, such a landscape, familiar to anyone living in the Blacksburg area, is ideal for the spread of Lyme disease.

“If you look at Google Maps and zoom out, all around Montgomery and Floyd counties you’ll see a patchwork of ideal locales for the spread of Lyme,” said Kolivras, a faculty member in the Department of Geography who has been researching the southward expansion of the tick-borne disease for over a decade. “Places with an herbaceous-forest edge, which often exist in a landscape with fragmented forests, are those that are most associated with Lyme disease spread.”

Kolivras, an affiliate of the Fralin Life Sciences Institute and its Center for Emerging, Zoonotic, and Arthropod-borne Pathogens, specializes in the field of medical geography, which seeks to understand the correlations between human health concerns and the places where they occur.

“If we understand geography as the science of understanding why things are where they are, medical geography considers disease outbreaks or health problems within the context of where they are happening and how they move around,” she explained. “We look at spatial patterns to determine the underlying processes that are informing health outcomes.”

At a time when information about the COVID-19 pandemic is available on scales as broad as countries and continents and as specific as neighborhoods and towns, understanding the ways that an illness moves is crucial to limiting its spread. In seeking to understand that spread, numerous variables come into play.

“My research is towards the physical geography side of things,” Kolivras said. “I look at environmental variability and change, and how they impact human health. I had originally focused on climate and health, but I realized very quickly that there are so many other variables that affect human health. Geography is the perfect discipline for understanding those variables because we draw on both human and physical conditions to understand health patterns.”

Kolivras admits that she didn’t start her college career with the intention of majoring in geography: “I’ve always been interested in people and places, but I didn’t know that was something you could study. I ended up in a geography course in college and realized that all of the stuff I loved was there.”

Kolivras translated her passion for studying people and places into her research, incorporating geospatial technologies such as geographic information systems (GIS) to study the rise in tick-borne illnesses in Virginia and the southeastern United States. She said that a benefit to working in the Department of Geography is the collaborative relationships she has developed with other researchers, both at Virginia Tech and at other universities.

“My background is in health and medical geography, and I’ll often collaborate with a faculty member who can bring their technical skills to the research,” she explained. “The key to understanding spatial patterns is to be able to see them visually and make inferences on the underlying processes that form those patterns from that data. Geospatial tools allow us to do that.”

In addition to her research on Lyme disease, Kolivras has also been part of a collaborative project focusing on the ways that land cover change has impacted human health in central Appalachia.

“There’s been little attention on land cover change impacts on human health in the region in the first place, so that will be a clear improvement on the existing literature,” Kolivras said. “The few studies that have examined human health impacts in the area, particularly those related to surface mining, have been conducted at a broad, county-wide scale, which is not the best scale to examine the spatial patterns and underlying processes related to interactions between human health and land cover change.”

Molly McKnight, a geography master’s student, has also been a part of the project team, which includes faculty from engineering, statistics, and population health sciences. According to Kolivras, McKnight found that pregnant women living in areas exposed to airborne contaminants from surface mining activities are more likely to experience adverse birth outcomes.

In all of her work, Kolivras strives to understand the dynamics between people, animals, and the environments where they live. She notes that a common misconception is that deer are the animals exclusively responsible for the spread of Lyme disease. In fact, the bacterium that causes the disease is frequently spread from ticks feeding on the blood of white-footed mice.

“The term is a ‘reservoir’ animal,” Kolivras noted. “The white-footed mouse is a common reservoir animal for Lyme disease, and thus a common source of infection for ticks. Those infected ticks will then find a deer that they will feed and mate upon, but the deer are not the sources of infection. If we didn’t have deer, we’d still have ticks capable of spreading Lyme disease from a reservoir like the white-footed mouse.”

Kolivras has recently co-authored a paper with a former geography master’s student and several Virginia Tech colleagues revealing that development decisions regarding land use and land cover have the potential to reduce the spread of Lyme disease in the southeastern United States.

“We have chosen to create residential developments that have the right mix of land cover characteristics for the Lyme disease transmission cycle,” she said. “Moving into the future, we can reduce our risk by making different land use planning decisions.”