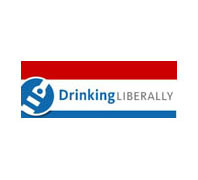 Riley Murray knew he was onto something.

“I got to know people in Roanoke by blogging and they invited me to come down to the Drinking Liberally meeting. I went and thought, Why not do something like that here in Staunton?” said Murray, who founded a local chapter of Drinking Liberally in December 2008.

The legendary election of President Barack Obama had just taken place, so people were ready to talk. Soon after the Staunton chapter started, one began in Harrisonburg. There are now nine chapters throughout Virginia including Charlottesville, Virginia Beach and Lynchburg.

The attendance is tied to the political season. At the meeting this past Tuesday, there were six people at the meeting. “When it first began, it was right after Obama was elected, so there were 20 to 25 people coming to the meetings. Now it’s the summer, and not too much going on politically, so we usually get about a half dozen at the meetings,” said Murray.

One member, Maggie Duncan, is from Northern Virginia. “Up there, there are political groups meeting on almost every corner. When I moved here, I felt a little lost until I found this group. It’s a great place to come and just have discussions because with like-minded people. There will never be a huge argument.”

“This is a place to have a healthy discussion about politics,” Murray said.

The group is very welcoming to anyone who would like to join. There have even been people to come to the meetings that would not necessarily consider themselves liberals; it is more of a social gathering. Politics are not the root of every discussion with this group. It is simply a place to meet new people and hear their opinions on different subjects.

A spinoff to the Drinking Liberally group is Reading Liberally. The group has been going on for about four months and was started by Cliff Garstang. A book is chosen a month in advance and is read by the group.

“This is a fantastic place to read and have really good discussions about the books,” said Garstang.

Information about the Reading Liberally group is available here.