Snow, especially when it piles up, complicates our lives at the same time that it simplifies.

We should welcome the interruptions that accompany the frozen white precip, but instead we complain – about the capricious, bone-chilling weather, about drifted roads that should have been plowed open by now, about scheduled activities being postponed or canceled, about mounting cabin fever.

Of such complaints in the past, I plead guilty as charged.

But in this most unusual winter of 2009-10, I’ve altered my discordant tune. 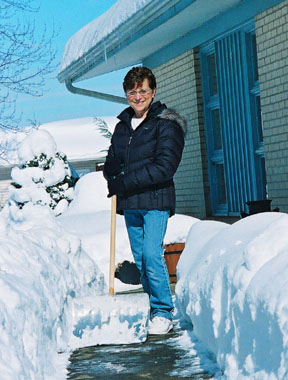 We’ve dwelt in the Valley for nearly 39 years, and while memory recalls some previous boisterous visits from Ole Man Winter that dumped upwards to three feet of snow, including a one-two punch in 1995-96 that left us reeling, the atypical aspect this go-round is the sustained cold spell and that has kept a heavy blanket of white dominating the landscape since the weekend before Christmas. And, it seems reluctant to bid us adieu.

The first snowfall dropped upwards to 24″ the weekend before Christmas, with news of my mom’s death coming at the height of the storm. We wondered if we’d be able to drive to eastern Pennsylvania for Mom’s funeral on Dec. 22, but we found the main highways largely clear, with much less snow greeting us at our destination. We were grateful for safe travel both directions.

Once back in the ‘Burg, we were in the midst of playing catch-up when warnings sounded of another wintry blast on the way – could be a repeat of the first blitzkrieg, forecasters declared, and they were right.

Just as the first flakes of the second salvo started to fall, I made a mad dash to the Rt. 42 Wal-Mart to pick up some basic comestibles and found myself amid a throng of frantic shoppers staring at long empty shelves where loaves of bread once rested. Further down another aisle, nary a single container of milk – whole, two percent or skim – could be found.

I left the store with some bacon, orange juice and catfood for always hungry feline Avery and ended up grabbing one of the last off-brand cartons of milk at a nearby convenience store, paying $3.50 for a half gallon of expediency.

Our canceled Friday night line dance lesson series suddenly afforded us some unexpected time to ourselves, and we weren’t going anywhere. I spent time on the computer, walked our treadmill, prided myself on spending little time in front of the TV except for brief “Weather Channel” reports. We retired for the night thinking that perhaps the forecasted repeat performance wouldn’t materialize after all, but it did.

With words coming by late Saturday afternoon of our Sunday church service being canceled, Sunday morning became a different experience of “church” for Anna and me – taking our time getting up, enjoying a rare leisurely breakfast while watching the snow continue from the sanctity of our warm sunroom, reading, listening to music, calling our families to make sure they were home, warm and safe.

We could too easily get used to becoming mattress Mennonites, taking things lying down.

The biggest hassle for me throughout this extended “break,” other than digging our vehicles out only to have them nearly buried again, was taking phone calls in semi-conscious state at 5:30 a.m. announcing late openings or classes canceled at Eastern Mennonite University on three separate occasions, necessitating weather-related announcements to area media.

My Miata didn’t move from its snowbound driveway moorings for more than two weeks. I wouldn’t want to venture out in the miniature coupe anyway and risk getting stuck or sliding into an embankment. At one point, the lightweight, rear-wheel drive vehicle balked and spun when I attempted to move it to clear the driveway space it occupied.

I did, however, entertain thoughts, once it felt safe to bundle up, to drop the convertible top, crank up the heater and cruise to Klines for ice cream – no snow cones, thanks.

I was glad many times to have access to my trusty ’97 Dodge Neon, which I drove hard every day on snow-packed secondary roads to work and other destinations. Then, I discovered only last weekend that sometime during its many over snow-packed, bumpy secondary roads that the rear license plate (and EMU Royals frame) must have vibrated loose, because they are gone. I hesitate to use the faithful steed again until I’m able to obtain replacement tags.

With temperatures rising into the low 40’s for the first in several weeks, the snow slowly began to melt, revealing our Christmas tree that still rests against the back of the house awaiting recycling.

On February 18, I gazed upon an unexpected but most welcomed site for sore eyeballs, a single robin perched on top of a snow pile, looking dazed and confused, wondering if it shouldn’t have taken that right turn at

Albuquerque. The harbinger’s chirp provides a welcome promise of new life that is to come.

When the snow piled up to the house does melt, I will begin searching for clumps of snowdrops and crocuses that often appear overnight and are putting on a colorful show by now as well as other spring bulbs pushing through the crusted mulch, seeking warm sunlight.

I await other signs of new beginnings, of restoration and renewal as the Lenten season begins, giving thanks for the silent mantle of white that has blanketed the Shenandoah Valley for nearly two months, slowing the pace, causing us, albeit reluctantly, to at least temporarily adjust some of our schedules and habits and to take time to reflect on our priorities and our tempo, whatever the season – if you get my drift.