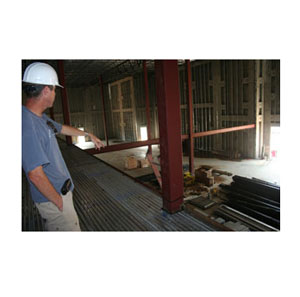 There’s a roof on top of the new Zeus Digital Theater, and workers were in the theater on Friday installing drywall in Theater 1.

Construction is slated to wrap on Sept. 1, giving crews a month to finish inside work on the lobby, screen, projectors and other indoors amenities.

Hayes expects to begin hiring in early September. The theater will open with a staff of 60 all told.

And yes, we’re close enough to begin thinking of tickets for Opening Night and the opening weekend.

“People have already started asking when they can prebuy their tickets,” said Hayes, who plans to make tickets for the opening night and the opening weekend on the Zeus website in late September.

Story and Photo Slideshow by Chris Graham. Chris can be reached at freepress2@ntelos.net.