The stats tell one story, the final score another: Virginia defeats Louisville, 31-17 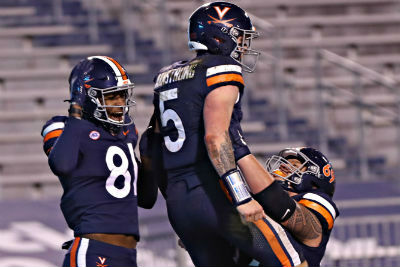 Louisville put up 478 yards on offense, but Virginia forced three turnovers, and didn’t trail after taking a second quarter lead on its way to a 31-17 win on Saturday.

I’ve been staring at the stats for 10 minutes, and can’t figure out how they match the game that I watched, in which UVA seemed to be in control almost from the get-go.

Yeah, the Noah Taylor picksix on Louisville’s first offensive series got things out of sorts stat-wise, but the key to this one, when I finally clicked on the right tab, was average starting field position.

The Cardinals (2-6) had that first drive, which had started with so much promise, going 12 plays, 54 yards, getting to the UVA 10, end with the Taylor picksix, an 85-yard INT return on a third-and-13 pass in the red zone that put the ‘Hoos up early.

Virginia (3-4) had its own issues on consecutive possessions, one ending on a fumble at the 1 by tight end Tony Poljan, on a play that had originally been ruled an incomplete pass and targeting, and ended with the targeting being reversed, and the incompletion ruled a catch and turnover, the other an ugly Brennan Armstrong INT.

Louisville turned the Armstrong INT into a quick four-play, 59-yard drive culminating in a Malik Cunningham TD that put the Cardinals on top.

Virginia got it right back on its next possession, going 67 yards on nine plays, concluding with an Armstrong 8-yard touchdown run.

Armstrong connected with Lavel Davis Jr. on a 9-yard TD pass play after Louisville failed to convert a fourth down near midfield on its first possession of the second half.

Cunningham finished up an 88-yard, five-play drive with a touchdown run that got it back to a one-score game late in the third.

Brian Delaney pushed the lead back to a full touchdown with a short 23-yard field goal with 10:03 left.

And then, after another Louisville turnover, the third of the day, Armstrong made it 31-17 with a 9-yard TD run.

Shane Simpson put up 50 yards on 12 rushes, and Wayne Taulapapa had 32 yards on eight carries.

In his first game as a Cavalier, Indiana transfer Ronnie Walker had 20 yards on five carries on the ground.

Davis had four catches on six targets for 74 yards and that third quarter TD.

Billy Kemp IV and Terrell Jana each had 46 yards receiving on three catches.

For Louisville, Cunningham had a Lamar Jackson-like 197 yards rushing and two TDs on 20 carries, and was 13-of-21 passing for 161 yards.

The stats looked better for Louisville, which outgained UVA 478-368, gained 317 yards on the ground, averaged 8.0 yards per play, and trailed for the final 36:03 in a game it ultimately lost by two touchdowns.