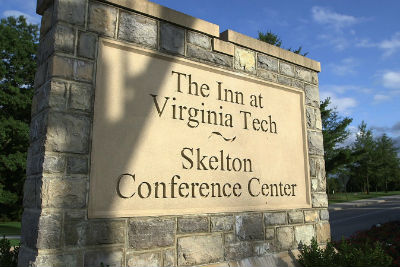 Built to be the “living room” of the university, The Inn at Virginia Tech and Skelton Conference Center has long been a favorite of faculty, alumni, and visitors to Blacksburg. Photo courtesy Virginia Tech.

The Inn at Virginia Tech and Skelton Conference Center is young when compared with Virginia Tech’s nearly 150-year legacy.

Yet, as the hotel celebrates its 15th year, its popularity — and adaptability in one of its most challenging times — intrinsically links and further strengthens the bond between the two institutions.

Opened in 2005 and built to be the “living room” of the university, the inn has long been a favorite of faculty, alumni, and visitors to Blacksburg. Its short history is rich from hosting countless storied guests and being the venue for many momentous occasions, including alumni weddings, Hokie tailgates, and hundreds of meetings and conferences.

“Over the past 15 years, we’re proud to have become the heart of hospitality for our community and region,” managing director Tom Cupo said. “We love opening our doors and welcoming our family of guests.”

Along with such notable names as Maya Angelou and alumna Hoda Kotb, numerous well-known coaches, political figures, television personalities, and university guest speakers have visited the inn throughout its history. Within a year of opening, for example, the inn hosted Ty Pennington while he was filming an episode of the ABC show “Extreme Makeover: Home Edition.”

Another well-known guest was Stone Phillips. The former “Dateline NBC” newsman stayed at the inn while working on a report about the findings from a head impact study in 2012. In 2017, the inn hosted Grammy-winning cellist Yo-Yo Ma when he performed to a sold-out crowd at the Moss Arts Center and gave a special master class to students.

Through the years, the inn has been the venue for many occasions and events, such as ZFEST in 2019. BMW Z-Series car enthusiasts from around the country came for a weeklong celebration and used the inn as their home base as they explored drives in the area. The group also took advantage of the inn’s conference space to hold a silent auction and awards gala.

Many alumni host their weddings on campus and choose to stay at the inn. Roughly 90 percent of the approximately 600 weddings or wedding-related events the inn has hosted have been for couples who met on campus or connected in some way through Virginia Tech.

“Blacksburg and Virginia Tech play such an important part in so many couples’ histories. We love welcoming them home to campus and being a part of their special day,” director of catering Bianca Norton said. “Whether it’s a special appearance of the HokieBird or entering the reception to ‘Enter Sandman,’ the Hokie spirit always shines, and we love getting to see it.”

The inn, part of Outreach and International Affairs, operates with three goals in mind: encouraging the exchange of ideas, enabling the public to benefit from the university’s knowledge resources through conferences workshops and courses, and stimulating the regional economy.

“The inn has certainly provided the university, the community, and the region with the desired level of hospitality envisioned when it opened. It has been a vital resource and asset in building the brand of Virginia Tech over the past 15 years,” said Virginia Tech Foundation CEO John Dooley, who led the launch. “There have been exceptional times when the inn and its staff have gone well above and beyond.”

“Undoubtedly, one of those occasions was April 16, 2007, and the days following the tragic shootings on campus,” Dooley said. “The inn served as the center of operations for the university’s media response, as well as where the families of victims were received and hosted. It was a very difficult time, but the inn responded with grace and dignity to make sure the families were provided the necessary accommodations and support.”

The Skelton Conference Center at the inn aims to honor the spirit of Ut Prosim (That I May Serve) that were hallmarks of its namesakes, William E. Skelton, a former dean of the Extension division, and his wife, associate professor emerita Margaret Groseclose “Peggy” Skelton, an avid supporter of the university and community advocate.

“My father always lived by that motto,” son John Skelton said. “He felt strongly that alumni and friends of the university needed a permanent place where they could come and gather. He felt if you provided a place they could call home, on campus, they would visit and remain engaged with all the good work going on at Virginia Tech and continue to support that work. He was a very wise person.”

This year, the conference center redesigned more than 5,000 square feet of meeting space to allow for both socially distanced on-site and hybrid meetings.

“Since we opened our doors 15 years ago, The Inn at Virginia Tech and Skelton Conference Center has epitomized the university’s commitment to outreach and engagement,” Cupo said. “We look forward to providing many more memorable experiences for visitors to our Blacksburg campus.”