The Francesco Badocchi column that I wanted to write 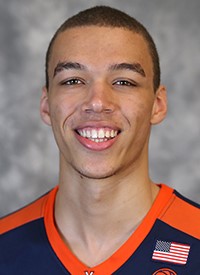 I wanted to write this particular Francesco Badocchi column, which is to also say, I really didn’t want to write the other one.

Badocchi announced this week that he is leaving the UVA basketball program, and I’ll tell you, not knowing the full details at first, I was worried.

Worried that Badocchi was leaving UVA in search of playing time somewhere else.

Which, sometimes, works out. Case in point: Marial Shayok.

Shayok left UVA after three years and landed at Iowa State, where he had to sit out a year, but ended up being able to showcase himself to the point that he heard his name called in the NBA Draft in June, and is now on his way to a pro career in the States.

Not everything ends up like it did for Shayok.

Jarred Reuter left after two seasons at Virginia for the greener pastures he assumed were going to be there for him at George Mason.

Didn’t work out for Reuter, a kid that I really liked.

Things also didn’t work out well for Teven Jones, a kid that I got to know really well, because he played a year as a postgrad at Fishburne Military School, which is a two-minute walk up the street from my home office in Waynesboro.

Jones played two seasons at UVA, memorably took a charge that was called a block at the tail end of the Sweet Sixteen loss to Michigan State in 2014, then decided to pursue playing time elsewhere.

Elsewhere ended up being a year at D2 Tarleton State, and another year at D3 Union College.

I didn’t want to write that story for Badocchi, who is at the heart of one of the better tales included in Team of Destiny: Inside Virginia Basketball’s Run to the 2019 National Championship.

As the story goes, coach Tony Bennett tapped into Badocchi’s talents as a pianist to help lighten the mood on road trips, by having him lead rousing games of “Name That Tune,” playing a mix of contemporary songs and some oldies, the oldies being the ones that Bennett liked the most.

As we wrote in the book, the players felt like the “Name That Tune” round that preceded the road trip to UNC in February, a game that came less than 48 hours after the home loss to Duke, was a key reason the ‘Hoos were able to win in Chapel Hill, arguably the biggest win of the season heading into the NCAA Tournament.

The story that I wanted to write about Badocchi would have been the one about how he decided to focus his energies on his studies, and his music, staying on track to getting a degree from UVA, not chasing down playing time at a mid-major, or worse.

I’m glad I waited to write this story.

This is what Badocchi had to say about his decision in an Instagram story:

“It was a very difficult decision to make after spending two incredible years with the team but I realize that I need more time to focus on my academic studies and pursue my passion for music which up until now I’ve had to sacrifice in order to dedicate my time almost exclusively to basketball.

“There aren’t enough words to thank Coach Bennett, the coaching staff, the technical and medical staff, the fans and my teammates who have helped make these two years such an incredible experience. I will continue my studies at the University of Virginia in economics and music and will always be support the Cavaliers!! Go Hoos!”

Basketball is just a few years of your life. That UVA degree, and your music, will be there forever.