The Fourth Side: UVA Football looks to bring its own energy with fan limitations 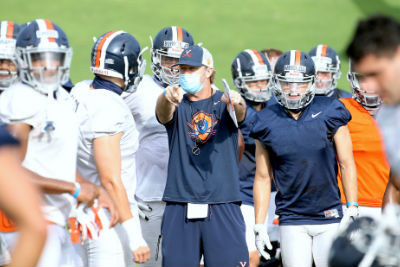 Offense and defense are two sides. Special teams is the third side. The Fourth Side, in Bronco Mendenhall’s thinking, is the sidelines.

Mendenhall has made it a point of emphasis with his team since arriving in Charlottesville that the Fourth Side is as important as the other three.

And just as he expects his teams to get after it on offense, defense and special teams, Mendenhall wants his players on the sidelines similarly, shall we say, engaged.

Which gets us to football in the Year of Our COVID 2020. There will be, at most, a thousand people in the 61,500-seat Scott Stadium for Saturday’s season opener between the ‘Hoos and Duke.

The energy in the stadium, then, won’t come from fans, as in a normal year.

“Our emphasis on the Fourth Side has started years ago. It would be remarkable and timely if that ended up being a competitive advantage for us this season,” Mendenhall said.

This being Mendenhall’s fifth team at UVA, the Fourth Side concept is long since ingrained in the culture in the program.

They even practice this way, if you can believe it.

“Coach has really harped on everyone on the sidelines getting into whoever’s on the field, and like, it really changed, cheering on our teammates,” senior defensive lineman Mandy Alonso said. “That’s what, like, feeds our Fourth Side. That how we practice, using our Fourth Side in practice. So, I feel like we’re going to be able to feed off each other, and it’ll be good.”

Anybody who played little league baseball or softball knows the concept: chatter.

It keeps you engaged in the game when you’re on the bench, in between plays. It’s a way for guys still working to get on the field to be a part of what’s going on.

“Seeing how it affects our teammates and our peers in other sports, the more energy we can bring to them, because we’re all going through the same thing, we’re all been here for however long, away from everybody else, on Zoom calls for class, on Zoom calls for meetings, so we know the impact our presence can have at a game,” senior wideout Terrell Jana said.

“Just for us, we aren’t doing anything, all we’re doing is football and Zoom right now. So, if we go watch some of our friends play a game, it’s always fun for us. So, it’s been it’s been a good experience. I’m glad that we can support them,” Jana said.

It will be interesting to see how it plays on TV on Saturday – since almost all of us won’t be there to feel the effects in person.

“I can imagine how different it is, and how unfortunate it is, to not have that same energy that you would get from playing in front of fans,” senior linebacker Charles Snowden said. “The Fourth Side, we try to show up, smaller numbers, but mighty in energy, and we just try to replicate as many people as we can kind of make up for the lack of numbers, but also try to keep that same energy high.”