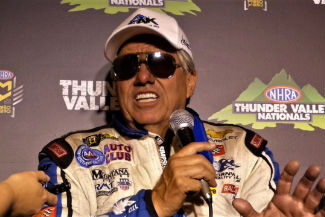 There was a disturbance in the Force at Thunder Valley, as John Force powered his Chevrolet Camaro Funny Car to the top spot with a 3.91 second run, at 326.95 mph to take the top spot in Friday evening qualifying at Bristol Dragway.

Although the feeling and designation is nice on Friday evening, tomorrow is a new day for Force and the 70 year old veteran is ready for round two on Saturday.

“The front end was up and down, three or four times,” replied Force in his post qualifying press conference. It’s a good race car, Courtney had that car last year and I am still learning and I’ve got a lot to learn right now.”

“Tomorrow is a new day,” commented Force.  “I’m happy for my guys. Tomorrow is going to be warmer but I feel good tonight.”

Toyota driver Shawn Langdon ran second with a 3.944 second run and a speed of 324.51 mph with Bob Tasca in third, Jack Beckman in fourth with J.R. Todd rounding out the top five.

Christiansburg native Matt Hagan posted a four second run at 317 mph in his Dodge funny car but could not crack the top five in Friday qualifying.

Ron Capps, a three time winner at Bristol, driving a Dodge, dropped to the near bottom of Friday qualifying, finishing in 14th and looking to make up the difference on Saturday and move into the championship round on Sunday.

In Top Fuel, Doug Kalitta took the top spot with a 3.755 second, 324.67 mph pass to take the top spot.  Kalitta captured his 1st number one qualifying pole of the 2019 season and earned the 50th of his career.

“It’s been a while since we won Bristol,” replied Kalitta, I’d like to think we’re looking good after our first bit of qualifying. The car was running strong, pulling a little to the left.  It definetly got my attention,” Kalitta added with a laugh. “

Kalitta was fifth going into the final round of Friday’s qualifying before pulling out the strong qualifying effort and taking the top spot.

Brittany Force held the top spot with a first round run of 325.45 mph in 3.790 seconds in first round qualifying but in the final twilight round, Force had trouble on her pass through mountains at Thunder Valley, relegating her to seventh and putting the pressure on Force as well as several other drivers going into qualifying action on Saturday.

Top Fuel driver Leah Pritchett improved on her first run of eighth and captured the second spot with Steve Torrence in third, Antron Brown in fourth and Mike Salinas rounding out the top five.

Second round qualifying begins at 8am on Saturday at Bristol Dragway.