The Five Things: How Virginia beat the #15 Tar Heels

Pressure on the QB 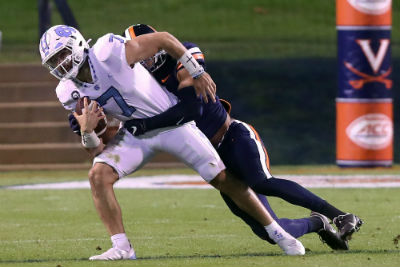 Just like last week, when Virginia was able to get 25 pressures on Miami QB D’Eriq King, the front seven was in UNC QB Sam Howell’s shirt early and often.

We don’t have the Pro Football Focus stats on pressures yet – won’t until tomorrow – but we do know tonight that Virginia had five sacks Saturday night.

Outside ‘backer Charles Snowden had four of them, on a 10-tackle night.

It’s supposed to be the case that when you get pressure on the quarterback, it impacts him even when you don’t actually get to him – in the form of happy feet leading to rushed throws, incompletions, INTs.

As with last week, nah.

That sums up how bad the Virginia secondary is right now.

The sacks, literally, only impact those specific plays.

But they’d been averaging 100+ yards per game each coming in.

It was more a factor of Carolina going more to the passing game, for the obvious reason – that the UVA secondary is overmatched with Joey Blount, Brenton Nelson et al out of the lineup.

Still, bottom line – when you factor in sack yardage, UNC had 93 yards on the ground on the night.

No way you had that on your bingo card going in.

Again, first glance, what? I’m saying the Virginia offense moved the chains? The Cavaliers were 3-of-11 on third downs.

Extending drives, staying on the field – it’s what you do.

Virginia scored on all five of its red zone trips – four touchdowns and a field goal.

North Carolina got scores on four of its five red zone forays – three TDs and a field goal, missing out at the end of the first half after fumbling inside the 5 with no timeouts in the waning seconds.

A touchdown there, and it’s tied going into the half, instead of UVA being up seven with the ball to start the second half.

The ‘Hoos scored to start the second half, making it a two-score game.

These kinds of little things seemed to go against Virginia consistently in the four-game losing streak.

Can we get Tim Hasselbeck to finally acknowledge that BA is a baller?

Guy keeps saying Armstrong is more effective as a runner, which feels like a slap in the face.

Kid is a good college quarterback.

ESPN can’t afford to send Hasselback to the games. We get it; the ACC Network isn’t doing well.

I promise: I’ll buy a gross of Tac Shavers. I mean, being able to shave underwater, sure, seems like something that could come in handy.

If I do that, could you maybe give us at least Matt Hasselbeck next week?