The experts think QB play will be a weakness for UVA: What if they’re wrong? 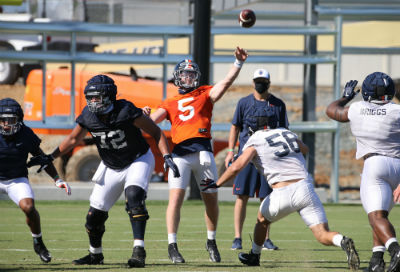 The reason defending ACC Coastal champ Virginia isn’t getting much love in the 2020 preseason is the uncertainty at quarterback.

Record-setting QB1 Bryce Perkins is now in the NFL. His understudy for the past two years, Brennan Armstrong, won a lengthy battle in camp with Mississippi State grad transfer Keytaon Thompson.

His reward: taking the first snap against in-state rival Virginia Tech in Blacksburg on Sept. 19.

“In my mind, what I knew is, if I would play after Bryce, after two years, I was like, oh, shoot, I’m gonna have Georgia. I was kind of preparing in my head the whole time that it was going to be a big game for us, and just a huge step for the program, and being that first game that was going to start. So, yeah, I mean, it really hasn’t changed much. I think it’s a little bigger now because it’s the in-state rivalry, and the first game can change and set the tone for the whole season,” said Armstrong, who appeared in 11 career games in 2018 and 2019 as the primary back-up to Bryce Perkins, going 17-of-25 for 258 passing yards and two TDs and adding 93 yards on 16 carries on the ground.

In two of his appearances, Armstrong appeared in one series while Perkins was sidelined for a medical evaluation. On both occasions he led UVA on a scoring drive, which included a field goal against Louisville and a touchdown at Georgia Tech.

So, there is some fire testing there.

The tests, and two years in the program, were key in the decision for the coaching staff to go with Armstrong in the battle with Thompson, a junior in terms of eligibility who transferred to UVA in May, after appearing in 20 career games for Mississippi State over the 2017, 2018 and 2019 seasons, though he appeared in just one game in 2019, which he was able to use as a redshirt year.

A consensus four-star recruit coming out of high school, Thompson was 2-0 as a starter, including leading the Bulldogs to a 31-27 win over the Lamar Jackson-led Louisville Cardinals in the 2017 Taxslayer Bowl, rushing for three scores and tying a MSU bowl record.

“I felt confident coming in. I mean that’s the one thing I just tried to have every day, just confidence,” Armstrong said. “With Keytaon coming and having to learn new offense, that’s always tough. Coach Anae’s offense is tough to learn at first coming in, and I was lucky enough to have two years under my belt. So, coming in with a lot of confidence, knowing the offense, being able to, you know, first day, come out and run it right away. The competition was great. It makes everyone better. You can’t ask for much more than that.”

It will be important for the coaching staff to continue to develop Thompson, for reasons including the usual – guys get hurt, and your backup needs to be able to come in on a moment’s notice, as Armstrong was able to do in two ACC games in relief of Perkins – and because of the unique circumstances of 2020.

“The biggest kind of projection is, you know, what happens if there’s a few issues with the with the, you know, contact tracing, a positive test with the coronavirus, any of that, and how could that affect our depth?” quarterbacks coach Jason Beck said. “We’ve kind of done a few things just to kind of overprepare with depth with, you know, just possible situations and how they can play out and having people prepared and ready as needed.”

In some ways, Thompson is more the prototypical system quarterback for Beck and offensive coordinator Robert Anae – big (6’4”, 225 pounds), with elite athleticism (Thompson ran for 147 yards in that Taxslayer Bowl win in 2017).

“With that kind of quarterback, you know, with Taysom Hill that we had at BYU, I mean, he’s doing that kind of stuff in the NFL. Because when you’re a pretty good athlete, it just enables you to do other things on the field,” Beck said.

But in the here and now, Armstrong’s experience and knowledge of the system won him the job.

He’s a different quarterback, certainly, than Perkins – more of a dropback passer, able to move the chains with his feet, but you’re not going to see as many designed QB runs for Armstrong as you saw the past two years for Perkins.

The hope is that the run game will be able to produce more via the traditional route. The offensive line is the most experienced in the ACC, and the backfield boasts two quite capable tailbacks in junior Wayne Taulapapa (473 yards, 12 TDs in 2019) and Towson grad transfer Shane Simpson, an FCS All-American in 2018.

That question mark, then, about quarterback play. What if it ends up being a non-issue?

Beck thinks the offense is ready to surprise some people.

“When we hit that first week back practicing, I was pretty impressed with where we were at with the quarterback spot and at the skill spots,” Beck said. “It seemed like for the first few days of practice, we were ahead of what you would have thought the first week of spring will look like. And then it’s just been a matter of improving and working hard every day.

“We’re still developing the capacity, the consistency, the execution, with the bigger roles that that guys are going to be in. And so, you know, that just takes time and reps and constant improvement. But where we’re at right now, you know, we’re in a good spot offensively and at the quarterback spot to be able to play well in the opener.”