The Church of COVID-19: Public health as religious zeal 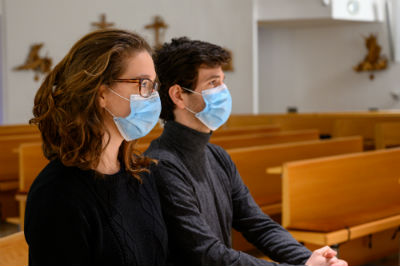 This was brought to my attention the other morning while chatting with a neighbor who apparently didn’t expect me to not just nod in agreement on the conventional wisdom regarding public health.

That’s pretty much where things stand now. Either you fall in line with what you’re told is the “science,” or you’re a “science”-denying, mouth-breathing MAGA.

This pushes aside the fact that what we’ve come to call the “science” has changed quite a bit over the past five months, in part because that’s how actual science works – we literally learn more about the world around us every day – and in part because there’s a distinction between science and “science.”

Science is an ever-evolving set of accepted bits of wisdom that the most honest among us know is only the best of what we know to be true based on what our collective consciousness can know and understand in the moment, which is to say, it’s subject to change as our ability to discern and process has time to deepen.

“Science” is a bludgeon used by people to drive home political and ideological points using the word as an imprimatur to reduce those who object to being heretics.

My use of language associated with religion is intentional; COVID-19 orthodoxy has taken on religious significance for millions of its adherents.

The very idea that the data actually suggest the danger is primarily with seniors, and even the most vulnerable among that population subset, and that the survival rate for those under 65 who contract COVID is greater than 99.9 percent, is so foreign as to evoke the response of the imprisoned inhabitants of Plato’s mythical cave.

For those who don’t read dead old white guys, the cave dwellers, when told that the only reality they knew was instead a series of images being projected onto a wall, reacted by wishing death on the messenger, and were only prevented from carrying out their wishes by the chains of their imprisonment.

OK, so, that’s being a little dramatic.

I wasn’t wished death; just was asked if I am a Trumper.

That particular cult of personality has its own issues.

Let’s just say I won’t be virtually attending the Zoom services for the Church of COVID-19 anytime soon.