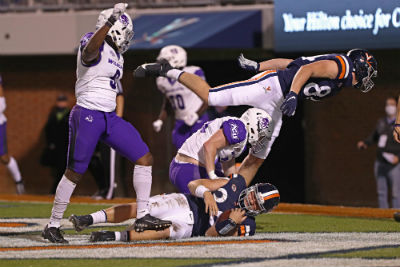 Lindell Stone is tackled in the end zone for a safety in the final minute of UVA’s 55-15 win over Abilene Christian. Photo courtesy Atlantic Coast Conference (Erin Edgerton/Daily Progress).

The folks in Vegas are going to be looking closely at the last 34 seconds of Virginia-Abilene Christian.

The books closed Saturday afternoon with the ‘Hoos a 39.5-point favorite.

Lindell Stone, the backup quarterback, kept hope alive for those who’d put their money on the ‘Hoos, dropping a nice bucket pass to Demick Starling for a 2-yard score that pushed the UVA lead to 49-7 with 5:57 left.

At this stage, if you’d bet Abilene Christian, you’re good.

Game over. Virginia will just run out the clock.

The Cavaliers expected an onsides kick, and Abilene kicked deep, and UVA downed the ball at its 5.

Down the ball from there.

End around on first down, loss of two.

OK, so, second down.

What happened next was … the oddest thing you’ll see from a team that only needed to down the ball.

Stone threw a backwards pass to the other backup QB, Keytaon Thompson, in the middle of the end zone.

Thompson, then, pitched it back to Stone, who was tackled in the end zone for a safety.

UVA pooch-kicked, and Abilene Christian, seemingly offended at the trick play, which, whatever, started punching the ball up the field, ruthless abandon, et al.

The ensuing drive, running out of time as it was, got into the Virginia red zone.

Then, a Mansell pass was tipped at the line, and intercepted by freshman linebacker D’Sean Perry.

Who had no one between him and the end zone.

This was an all-time bad beat.

UVA had been up 49-7 inside of two minutes to go, covering.

Then … picksix to close us out.

It’s too much a perfect storm to have been anywhere near engineered, but still.

It’s a philosophical question, that one.

We can actually ask, what was UVA offensive coordinator Robert Anae thinking?

No doubt that one will get asked on Wednesday, next time we get to talk to Anae, per custom.

For now, we have to rely on the head coach, Bronco Mendenhall.

So, ahem, Bronco, what was your guy Anae thinking, calling a double-pass from the 3, up 36 with kneel-down time left?

“We literally were lining up players at timeouts and having them study the call sheet, and have older guys telling younger guys what to do and yell from the sideline,” Mendenhall said.

“Then Robert Anae was off a line. He called in the wrong play at the end. We were trying to run out the clock, and we end up getting a double pass called out of our own end zone. So, it’s complete accident. It was just like, what the crap just happened?”

“We’re trying to substitute different players in, and got off on the script by a line. It shows you what being off one line can do maybe in your life, but also in a football game, where you can go from running out the clock to a double pass.”

“I guess if that didn’t happen, then D’Sean Perry doesn’t have a chance to run an interception back for a touchdown. So, yeah, there’s a silver lining, and great moment for him.”

The concept of Occam’s razor seems to apply here.

Occam’s razor is, as defined by Merriam-Webster, “a scientific and philosophical rule that entities should not be multiplied unnecessarily, which is interpreted as requiring that the simplest of competing theories be preferred to the more complex or that explanations of unknown phenomena be sought first in terms of known quantities.”

Basically: “the simplest explanation is usually the right one.”

Even so, if your next-door neighbor seemed to be celebrating that Perry picksix a bit more than you thought appropriate, now you know why.