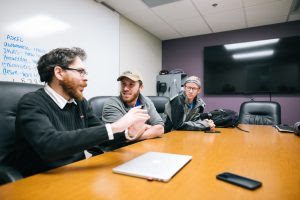 A team from Eastern Mennonite University is the first from the United States to join an international collaborative project to design an economically viable, hypersonic, 300-passenger aircraft.

The H2020 STRATOFLY academy, the European Organization for Nuclear Research (known popularly as CERN) and the European Space Agency have invited input from university teams through a massive open online platform, said Professor Stefano Colafranceschi. Its goal is “high-speed civil passenger transport along antipodal routes in the stratosphere” by 2030-35, according to its Twitter page.

“I’m looking forward to being able to work with new people I haven’t yet gotten to take classes with,” he said, “as well as being able to work on a project that combines my field of study (computer science) with my personal interests in aviation and engineering.”

The European Union-funded STRATOFLY project “is highly multidisciplinary and combines technological and operative issues,” its website states. In addition to economic, public safety and other issues, a new hypersonic jet must integrate “innovative propulsion systems, unconventional structural configurations and systems for the thermal and energy management” with reduced emissions and noise, among other attributes.

International connections – specifically “getting to learn from and connect with people from all over” – drew Andreas, a sophomore math and computer science major, to the project, as did the more immediate experience of being part of the team.

“Certainly learning collaboration skills will be helpful in the future,” he said. “I hope we can add something substantial from EMU.”

Ultimately, Colafranceschi told the team, any contributions to such a project face a tricky test: integration with all other aspects of the plane’s design. That will take research and trial and error.

“Don’t expect that whatever you will do will be successful,” he said. “There are many things that will go wrong. Satisfaction is when you see that your component is happily integrated into the larger project.”