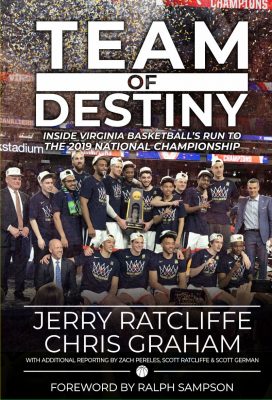 Team of Destiny: Inside Virginia Basketball’s Run to the 2019 National Championship, by Jerry Ratcliffe and Chris Graham, is available for $25.

The book, with additional reporting by Scott Ratcliffe, Zach Pereles, and Scott German, will take you from the aftermath of the stunning first-round loss to UMBC in 2018, and how coach Tony Bennett and his team used that loss as the source of strength, through to the ACC regular-season championship, the run to the Final Four, and the thrilling overtime win over Texas Tech to win the 2019 national title, the first in school history.

About Team of Destiny

Jerry Ratcliffe is the dean of the UVA sports media, having covered the ‘Hoos and ACC basketball for 45 years.

The four-time Virginia Sportswriter of the Year, as selected by the National Sportscasters and Sportswriters Association, Ratcliffe is also the author of The University of Virginia Football Vault: The History of the Cavaliers, published in 2008.

“Hootie” is now the editor of the popular JerryRatcliffe.com and the host of “The Jerry Ratcliffe Show,” which airs on Saturdays at 9 a.m. on ESPN Charlottesville, 102.9 FM.

Chris Graham has covered UVA athletics since 1995. A 1994 graduate of the University of Virginia, he is also the co-author of Mad About U: Four Decades of Basketball at University Hall, a historical review of the famed former home of UVA basketball, published in 2006.

Graham is the editor of AugustaFreePress.com, which launched in 2002, and a play-by-play broadcaster covering college baseball and college football for ESPN3 and ESPN+.

Scott Ratcliffe has covered UVA Athletics for more than a decade, and has been a correspondent for publications including the Miami Herald, Philadelphia Daily News, Charlotte Observer, Newport News Daily Press, Raleigh News & Observer, and Tulsa World, among others.

Zach Pereles covered the 2019 UVA basketball season for AFP. A 2018 graduate of Northwestern University, he covered Northwestern’s football and men’s basketball teams from 2014-2018, a run that included him covering Northwestern’s first ever NCAA Tournament berth in 2017. He has also written for Yahoo Sports and Sports Illustrated, and he recently completed a season as a digital media contributor for the Denver Broncos.

Scott German covers UVA Athletics for AFP. Scott has been around the ‘Hoos his whole life. As a reporter, he was on site for both of UVA basketball’s Final Fours, in 1981 and 1984, and has covered UVA football in bowl games dating back to its first, the 1984 Peach Bowl.