Team first: Virginia D won’t produce gawdy stats, but it will get the job done 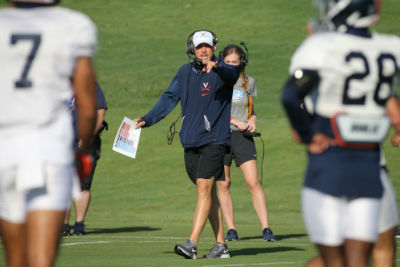 It boggles the mind that the UVA defense didn’t land a single guy on the preseason All-ACC teams.

Well, OK, it doesn’t boggle the mind of Nick Howell.

“One thing I do know about our defense, it’s a really team-oriented defense. So when you look at sacks or in coverage or whatever, we’re asking those guys to do quite a lot of different things,” said Howell, the co-defensive coordinator and defensive backs coach.

The defense under Howell and co-defensive coordinator Kelly Poppinga, under the watchful eye of defensive guru Bronco Mendenhall, isn’t going to produce guys with gawdy stats.

Remember the Ds of the Mike London era? You’d get a Quin Blanding or Micah Kiser making tons of tackles, but those units also tended to give up tons of points.

The Mendenhall/Howell/Poppinga defense is predicated on the concept of multiples – linemen eating up blocks, edge rushers being able to back into coverage, middle linebackers and defensive backs able to put pressure on the QB, the effect being to make it hard for play-callers on the other sideline to know from one play to the next what the defense is going to do out of any particular look.

Which is how you have 6’5” outside backer Noah Taylor dropping back into coverage on a third-and-18 in the fourth quarter against Virginia Tech, picking up the slot receiver in coverage, then dropping back to pick off a Hendon Hooker pass at the first-down stick.

It’s also how Matt Gahm was utterly untouched on a sack on the game-clinching defensive series later in that game, when the Tech offensive line, confused by what Virginia might dial up, overloaded to pick up inside pressure.

This unit isn’t going to have a guy lead the ACC in tackles, sacks, INTs.

It is going to get the job done.

“There’s a lot of guys that can do a lot of different things,” Howell said. “I think it forces an offense to account for everybody all the time with the different things that we do. I would say, you know, I’m not an offensive coordinator, but I would venture to say when they watch us, there’s quite a few things that you have to be ready for in your preparation.”