Crystal Graham: The tour in pictures 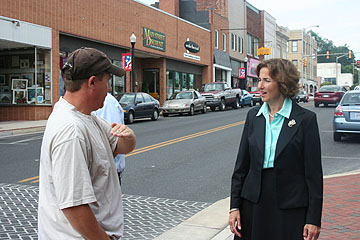 “Maybe we’ve seen the worst, and things are picking back up,” said Wagner, the Democratic Party lieutenant-governor nominee, after a walking tour of downtown that included visits with three new business owners, all women.

“Three new businesses in this economy. That has to be a good sign,” said Wagner, a small-businesswoman herself and former state treasurer and Secretary of Finance who talked up the owners at Natural Beauty Studios, River City Art and Wine Emporium and Short and Sweet Bakery among others on her tour with 25th District Democratic Party nominee Greg Marrow.

Wagner and Marrow talked up their economics plans with supporters at the bakery after the tour. Marrow used the downtown backdrop to detail a legislative effort to provide incentives to business and industry to rehab and readapt existing buildings for reuse in places like Downtown Waynesboro. “I figure if we can give tax breaks to companies like Wal-Mart to come in and employ people at submarket salaries, we can certainly do that for small business,” Marrow said.

“It’s interesting that Bill Bolling has been lieutenant governor for almost four years, and it took up until three months before the election for him to take notice of the fact that we had a shortage in the Governor’s Opportunity Fund,” Wagner said.

“I have spent the last seven years working with Mark Warner and Tim Kaine to create jobs. We’ve created almost 200,000 well-paying jobs that come with benefits that put people to work all over the Commonwealth. But we’ve got to do more,” Wagner said.