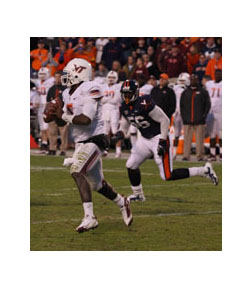 Tyrod Taylor is the key to the run at a national championship that Virginia Tech fans are hoping is in the offing in 2010.

The key to Taylor’s season, and thus the Hokies’ season, could be the continued development of his backups.

“We’re much better-equipped at backup quarterback this year than we were last year at this time,” Tech coach Frank Beamer told reporters at last weekend’s ACC Football Kickoff, talking about his #2 quarterback, redshirt sophomore Ju-Ju Clayton, and his #3, redshirt freshman Logan Thomas.

“Number one, Ju-Ju has had a lot of reps. Number two, Logan has been there the whole time, at spring practice. So we’re much more ready for a second quarterback to come in there than we were last year at this time,” Beamer said.

Cracking the code, what Beamer is saying there is that offensive coordinator Bryan Stinespring can feel a little more assured unleashing Taylor’s full complement of skills. After running for 738 yards in 2008, when he split time at QB with Sean Glennon, Taylor ran for just 370 yards in 2009 as Stinespring and Beamer pushed Taylor to stay in the pocket and avoid the injury bugaboos that took him off the field for stretches in his freshman and sophomore seasons.

Taylor, for his part, has been preparing for the increased load.

“I think I’ve gotten stronger,” said Taylor, who is looking forward to being able to showcase his arm and his quick feet in his swan song in Blacksburg.

If Beamer had had his druthers, of course, he’d have Taylor for one more season. Beamer famously tried to redshirt Taylor in both his freshman and sophomore years.

“I wish like heck that we’d redshirted him. And we tried – we tried two times. But it was just in the best interests of our football team, in my opinion, that we needed to play Tyrod. The way the team was built, we needed him in the backfield. That’s the way it is,” Beamer said.

“The other side of it is, he’s got, when you’re playing in there, and the bullets are flying, you’re getting better, too. He’s an excellent quarterback. But sitting here today, you’d like to say, He’s got two more years. What he was in spring practice and all, I thought he was dynamic. I thought, This guy is really good,” Beamer said.