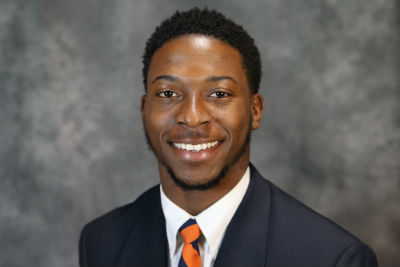 UVA football fans have been waiting for Tavares Kelly to have the kind of game he had on Saturday in the 33-28 win over Georgia Tech.

Kelly, a sophomore wideout, had two catches for 46 yards, including a crucial 35-yarder late in the third quarter that extended a Virginia drive that ended with a field goal that put the ‘Hoos up 27-21.

But where Kelly’s presence was felt most was on the kick-return unit.

Most importantly, his 40-yard return after a late second quarter Georgia Tech score gave Virginia a short field that turned into a TD that put the Cavaliers up going into the break.

That one was the only time on the day that Reed came out with the return unit, as a decoy.

“We kind of knew what was going to happen, because Joe came out with me, and Joe has respect, so we knew they weren’t going to kick it to Joe, and they had kind of seen what I had, so they squibbed it. I got it, and I trusted my teammates, like coach taught me and Joe to do, and they made it happen for me. I just contributed to a play that they made happen,” Kelly said of the big return.

Reed is also the only FBS player with 100+ career returns and a career kick return average of 28+ yards.

It says something to the depth at the skill positions that Kelly was able to step in for him and be productive.

“We had another good player that’s a capable returner, and that allowed us to shift some of it,” UVA coach Bronco Mendenhall said. “I wasn’t sure if Joe would play this week, but he did a really nice job doing what we could. He’s not 100 percent. The bye comes at a good time for him.”