The Human Rights Campaign (HRC) released its third annual report assessing LGBT equality in 353 cities across the nation, including nine in Virginia. 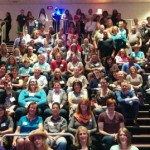 U.S. Sen. Tim Kaine joined more than 175 Senators and Representatives to write a letter to President Barack Obama calling on him to issue an executive order banning contractors from receiving federal government contracts unless they have a policy prohibiting discrimination based on sexual orientation and gender identity.

On Saturday, April 5, Equality Virginia will recognize the 2014 class of OUTstanding Virginians – those who represent Virginia’s lesbian, gay, bisexual, and transgender community with distinction and who are committed to moving the LGBT community forward.

Across the board reaction to same sex marriage ruling

Groups on all sides of the political spectrum have been weighing in on the ruling of federal Judge Arenda Wright Allen that overturned Virginia’s ban on same sex marriage in the case of Bostic v. McDonnell.

A Virginia Department of Taxation bulletin concerning treatment of legally married same-sex couples under Virginia’s tax laws is coming under fire from the ACLU of Virginia. According to the bulletin, the marital status of a couple for Virginia income tax purposes is based on whether the couple is considered married for federal income tax purposes.

The U.S. Court of Appeals for the Fourth Circuit today ruled that Ophelia De’lonta stated a “plausible” claim that the Virginia Department of Corrections violated her constitutional rights when it refused to have her evaluated for sex reassignment surgery. The ruling allows Ms. De’lonta’s case to move forward in the lower court.

AFP InDepth | A ‘strategic quiet’ on the LGBT front

You don’t need to go as far as gay marriage. A candidate can win the support of the LGBT community by advocating legislation that would allow employees to include gay and lesbian partners in group life-insurance policies. Indeed, it doesn’t take much to break through what Jay Fisette, the Arlington County Board of Supervisors member […]