Redshirt sophomore receiver, David Washington, scored the game-winning touchdown in overtime to lead ODU to a 30-27 victory over Louisiana Tech on Saturday

The No. 11 UVA wrestling team posted a trio of team victories Sunday in its season-opening quad meet at Memorial Gymnasium. 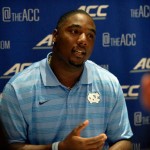 NC State couldn’t seem to miss in the first half. Duke took care of that problem after halftime. The Blue Devils held State to 35 percent shooting in the second half to pull away to a 75-67 win in Saturday’s second ACC Tournament semifinal.

ACC Player of the Year T.J. Warren scored a game-high 28 points and helped his NC State Wolfpack secure a huge quarterfinals win over #11 Syracuse. With the win, State advances to the semifinals for the third straight year.

#7 seed NC State held off a late rally from #2 seed Syracuse to pull off the first big upset of the 2014 ACC Tournament, 66-63, Friday night in Greensboro, N.C.

Oh, so close: Can NC State knock off Syracuse?

This was back when Syracuse was still undefeated and apparently undefeatable, though increasingly vulnerable. NC State led the Orange by one in the final seconds in the Carrier Dome, and then couldn’t get the ball in bounds.

NC State sophomore forward T.J. Warren has been chosen as the 2014 Atlantic Coast Conference Coaches Basketball Player of the Year.

UVa. led 21-4 at the 11:14 first-half media timeout. Somehow, things then got worse for NC State. Virginia shot 60 percent in the first half and held the Wolfpack to 28.9 percent shooting for the game en route to an easy 76-45 win in Raleigh Saturday.

On a day when sophomore Chandler DeHaven tied the single-season Bridgewater record for made field goals, the Bridgewater Eagles football team couldn’t overcome five turnovers and an efficient Catholic offense in a 42-19 loss to the Cardinals at the Jopson Athletic Complex.