Examining the Artifacts of War at Woodrow Wilson Library in Staunton

The Woodrow Wilson Presidential Library, in conjunction with Bonhams Auction House, and in partnership with the Stonewall Brigade Museum, will conduct a military antique appraisal event the weekend of October 17th and 18th.

In late 1864, the Civil War in the Shenandoah Valley came to its thunderous climax. From May to July of that year, Confederate forces under Gen. Jubal A. Early had continued to make the region a “Valley of humiliation” for the Union.

Going OUT is IN at Staunton Parks and Recreation this July

This July, Staunton Parks & Recreation and NRPA are challenging everyone to get out and visit their community parks and recreation during national Park and Recreation Month. 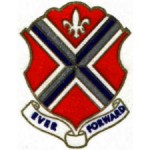 At the Spring Meeting of the Augusta County Historical Society, 3 p.m. Sunday, March 16, a Staunton native and former commander of the Stonewall Brigade will speak on the frequently honored fighting unit, and ongoing efforts to remember those who served.