Contractors replacing the Route 340 bridge over Cub Run in Page County have scheduled 24-hour operations during the week of June 12-16.

A portion of Route 642 (Stoneyman Road) in Page County is scheduled to close for bridge replacement and related slope work.

Bridge replacement to close a portion of Route 614 in Page County Aug. 8-26

Bridge replacement under way on Route 340 in Page County

The Virginia Department of Transportation has begun to replace the Route 340 bridge over Cub Run in Page County.

Folks back home where I grew up in Page County, Virginia were not known to have a lot to say about events.

The Virginia Department of Transportation has scheduled road closures in Augusta and Page counties for railroad crossing maintenance beginning Sept. 18. Each of the closures is expected to last two to three days, and signs will direct motorists on detour routes.

The Waynesboro Police Department has charged a Page County woman on a 2012 sexual assault of then-13-year-old Waynesboro boy.

Number of Virginia-raised turkeys is up from 2013

The number of turkeys raised in Virginia this year is expected to total 16 million, up 3 percent from the 15.5 million raised in 2013, according to the Virginia Department of Agriculture and Consumer Services.

A Shenandoah Valley-based zero-emission portable generator manufacturer recently donated a brand new flag to NeuroRestorative Virginia at Breezy Hill “just in time for Flag Day,” according to Scott French, one of SUNRNR’s principals.

I have had more time to spend in my garden than I have had any spring for many years. I had almost forgotten how relaxing and satisfying working in the soil can be. 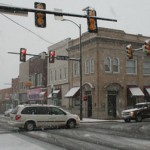 VDOT roads update: Up to a food of snow has made travel treacherous

Up to a foot of heavy wet snow has fallen on the Shenandoah Valley, creating potentially dangerous driving conditions for Monday afternoon. Snowfall is expected to taper off this afternoon, but drivers are advised to avoid unnecessary travel until road conditions improve.

LurayPageFreePress.com, a service of Augusta Free Press LLC, debuted with its first news posted to the website on Saturday, March 3. The website provides news on local government, schools, business and events in and around Luray and Page County. In addition to providing local news, LurayPageFreePress.com provides marketing, public-relations, web- and graphic-design and video-production services […]

At its October meeting, the Commonwealth Transportation Board awarded regional bridge contracts which include repairs to 21 bridge structures in the Virginia Department of Transportation Staunton District. The award is part of the commonwealth’s continued efforts to invest nearly $695 million in highway funding from the American Recovery and Reinvestment Act. The repairs in the […]