Concern for the New Generation has launched a campaign calling for a community veto of a proposed natural gas compressor station.

The nose is key to natural gas safety

Your individual sense of smell is important to remaining safe around natural gas.

A $2.1 million investment replacing aging natural gas pipelines in Staunton by Columbia Gas of Virginia will start this week.

Columbia Gas of Virginia adds an odorant called “Mercaptan” to the natural gas system which gives it a distinctive smell that is similar to Rotten Eggs.

Several groups have filed arguments against the continued construction of the Cove Point liquefied natural gas export facility on the Chesapeake Bay at Lusby, Maryland.

On Tuesday, The Roanoke Times reported that the decision to share pipeline comments with the governor’s office before making them public was one outcome of an Oct. 28 meeting in Richmond that included representatives from 13 state agencies involved in the permitting process or mitigation efforts for the proposed pipelines. The Times reported the purpose of coordinating with the Governor’s office was to “ensure that state agencies will speak about the pipeline projects in the same way.”

Cove Point, the the first liquefied fracked gas export terminal to be built on the East Coast, and the Atlantic Coast Pipeline are directly connected in ways that are both insidious and dangerous for citizens of Virginia, Maryland and West Virginia.

The Federal Energy Regulatory Commission (FERC) is not informing the public about the big picture when it comes to natural gas infrastructure projects related to increased gas drilling in the Marcellus and Utica shale formations according to several environmental groups. 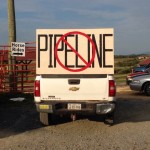 Agricultural methods over the past 12,000 years have been responsible for two-thirds of our excess greenhouse gases, essentially mining soil carbon and converting it to carbon dioxide and methane, beginning a slow stable warming that now accelerates with burning of fossil fuel.

The U.S. Forest Service today released a new plan for how the George Washington National Forest will be used and managed in the future.

The City of Charlottesville is a quarterfinalist in the Georgetown University Energy Prize, a nationwide competition for small-to-medium sized communities to compete to win a $5 million grand prize by saving energy.

More than 300 natural gas operators and pipeline contractors vital to the success of the Commonwealth of Virginia’s programs for pipeline safety will be attending the 23rd annual conference hosted by the State Corporation Commission.

Hundreds of Augusta County residents descended upon Augusta Expo in Fishersville into Monday evening to get a look at Dominion’s plans for a pipeline that would bisect the region.

A coalition of 22 organizations from across Virginia and West Virginia has formed the Allegheny-Blue Ridge Alliance in response to the September 2 announcement of the proposed 550-mile natural gas pipeline from Harrison County, W.Va., to Robeson County, N.C.

As expected, Duke Energy has selected Dominion Resources and its subsidiaries to build and operate a massive new natural gas pipeline slicing through the heart of central Appalachia and Virginia’s Southside.

Governor Terry McAuliffe announced Wednesday that two Virginia agencies have signed an agreement on coordinating environmental reviews of potential permits for oil and gas drilling in the Coastal Plain that includes Tidewater.

Friends of Nelson, one of several groups opposing Dominion’s proposed 42” natural gas pipeline, calls the project incompatible with the tourism and agricultural way of life in the mountainous rural county.

We can eliminate our addiction to oil and coal by 2050 and use one-third less natural gas while switching to efficient use and renewable supply.

A new study by the American Council for an Energy-Efficient Economy (ACEEE) outlines how energy efficiency could be used in an upcoming standard by the U.S. Environmental Protection Agency to reduce CO2 levels with no net cost to the economy.

According to a new report released today by the American Council for an Energy-Efficient Economy (ACEEE), energy efficiency is the cheapest method of providing Americans with electricity.

Cap and trade, whereby big polluters must pay to emit greenhouse gases against a capped total amount that is reduced over time—has been in effect across the European Union (EU) since 2005. This so-called Emissions Trading System (ETS) requires 11,000 of the largest electric and industrial facilities in 28 European countries to participate.

In October of 2013, the U.S. Energy Information Administration reported that 90% of homes were expected to have higher heating costs this winter as compared to last year.

Wild Virginia is excited to host a special, free screening of Gasland II in Harrisonburg.

Carbon dioxide emissions are indeed lower than at any time since 1994, according to data recently released by the U.S. Energy Information Administration (EIA). But if you think that the rise of the hybrid car, our embrace of public transit, walking, biking and those new windows on the house are behind the trend, think again.

While the holidays are festive and fun, they can take a toll on the environment. All that shopping, decoration, food preparation and travel adds up to more carbon emissions and more waste. But there are ways to minimize our impact and still celebrate the season in grand style.

Hydraulic fracturing (known as “fracking”) is a method of causing fissures in underground shale rock formations to facilitate the extraction of otherwise inaccessible natural gas and oil. In a typical fracking operation, drillers inject a mixture of pressurized water and chemicals underground to fracture the rock and free up the gas and oil.

The Cuccinelli for Governor campaign released the following statement regarding the Inspector General report that a senior assistant to Attorney General Ken Cuccinelli “inappropriately used Commonwealth resources to support” private litigation filed against two energy companies by Southwest Virginia residents for allegedly cheating them out of royalty payments for natural gas drilled on their land.

A senior assistant to Attorney General Ken Cuccinelli “inappropriately used Commonwealth resources to support” private litigation filed against two energy companies by Southwest Virginia residents for allegedly cheating them out of royalty payments for natural gas drilled on their land.

Citizen groups debuted a new website this week that will educate the public about the impacts of oil and gas drilling and hydraulic fracturing on National Forests in the eastern U.S. and provide them with tools to evaluate and challenge drilling and fracking proposals.

It is difficult to say which of the growing number of fuel options will power the cars of the future. But natural gas, given its domestic abundance, low price and lesser carbon footprint, is certainly a contender, at least as far as researchers at the federally funded Argonne National Laboratory are concerned