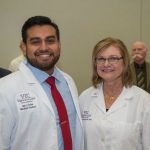 Jay Patel’s path to medicine begins with the heart — specifically one that belonged to his sister. Patel was 5-years-old when his twin sisters were born. One had Tetralogy of Fallot, a rare condition when a baby is born with four heart defects.

The Department of Orthopedic Surgery at University of Virginia Medical Center has been honored among “100 hospitals and health systems with great orthopedic programs” for 2015 by Becker’s Hospital Review.

In drug delivery research, finding a pharmaceutically active molecule is only half the battle: the drug must also be able to safely reach its target.

Researchers at the Virginia Bioinformatics Institute at Virginia Tech have uncovered key cellular functions that help regulate inflammation — a discovery that could have important implications for the treatment of allergies, heart disease, and certain forms of cancer.

Researchers at the University of Virginia School of Medicine have determined that the brain is directly connected to the immune system by vessels previously thought not to exist.

VCU physician-researcher to help advise the nation on preventive care

Euthanasia is one of the most sensitive areas of veterinary medicine, but a group of students at the Virginia-Maryland College of Veterinary Medicine at Virginia Tech decided to tackle it head on with a series of educational events.

When The Health Wagon, a spiffy 2014-model motorhome, rolled onto the Drillfield this week, it wasn;t there to deliver flu shots or accept blood donations, but rather to tell a story.

Siblings find EMU the right place to thrive and grow

The EMU database contains 46 family names associated with siblings enrolled in the fall of 2014. Three families have a trio of offspring enrolled, including two sets of parents who themselves graduated from EMU.

UVA researchers have identified a simple way for teaching hospitals to elevate doctors’ job satisfaction and improve retention: make sure the doctors have the right mix of responsibilities.

Get ready for Small Business Saturday in Staunton

I admit I have a love affair with the business owners of Staunton, Virginia. There. I said it. I can’t help it though!